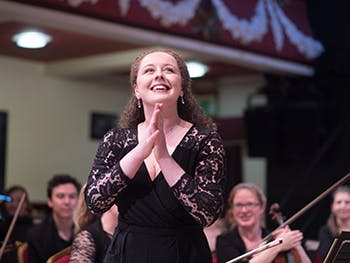 Royal Birmingham Conservatoire graduate Samantha Oxborough has been announced as one of 17 artists selected for the National Opera Studio Young Artists Programme 2019/20. The National Opera Studio plays an essential role at the heart of British opera by providing professional training of the highest quality for singers and répétiteurs who have the potential to become the leading artists of their generation.

Mezzo-soprano Samantha will spend nine months gaining the wide range of skills needed to be an opera singer working at a professional level. The opportunities for selected young artists also include working with National Opera Studio’s partners; including Opera North, Scottish Opera and Welsh Opera.

The intensive programme includes exposure to the requirements and expectations of an opera singer working on the international stage. The Young Artists Programme is a prestigious professional training opportunity which only accepts a handful of the finest vocalists from all around the world.

Lancashire-born Samantha is a recent graduate from Royal Birmingham Conservatoire, gaining a Postgraduate Certificate and a Bachelor of Music with First Class Honours under Christine Cairns and David Wilkinson.

During her time at RBC, Samantha was awarded The St Clare Barfield Memorial Bowl for Operatic Distinction by Conservatoire Principal Julian Lloyd Webber in 2016, and won first place in the Cecil Drew Oratorio prize, Edward Brooks Lieder prize and the Conservatoire Singing Prize, joint first in the Ashleyan Opera prize and second in the Doris Newton Music Club Prize. She was also a finalist in the Leamington prize and the Town Hall Symphony Hall prize.

Being selected as one of the singers to be on the Young Artists Programme at the National Opera Studio will be invaluable for my future career. The connections that I will make from this will be absolutely crucial going forward, and the experience will take my singing to the next level. – Samantha Oxborough

In 2017, Samantha proudly sang as a soloist in a concert in Kineton organised by Roderick Williams OBE for the Woman's Institute. She also sang as Zerlina in the duet 'La ci darem la mano' by Mozart, alongside Roderick as Don Giovanni. On the same day she won the Geraint Morris Award – an annual Welsh competition for talented young soloists – and as a result Samantha was one of the soloists at the Festival of Massed Choirs in the Royal Albert Hall, London in May 2017.

At the start of the 2019/20 academic year, Samantha will join 12 other exceptional singers (and four répétiteurs) about to take a significant step into a fully professional career by moving to London and joining the Young Artists Programme at the National Opera Studio.