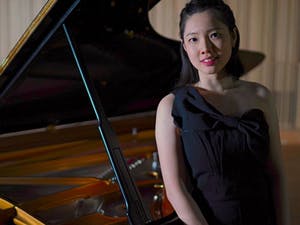 RBC alumna Petrina Ching and postgraduate student Mun Sum Chew (Olivia) (pictured) have been awarded £10,000 Joseph Weingarten Memorial Trust Scholarships to study at the Liszt Academy of Music in Budapest. Both students are pianists and will take up their postgraduate places in Budapest in September.

Petrina studied undergraduate and postgraduate degrees at RBC, where she graduated with distinction from her Master’s course in June 2020.  At this time, she returned to Malaysia and, due to the pandemic, most of her performances came to a halt.

Petrina channelled her energy into teaching, which led to her developing her own music appreciation curriculum. She’s also been conducting music appreciation workshops online and teaching in various educational institutions to build awareness and share her passion for classical music in Malaysia.

Olivia Mun Sum Chew graduated with First Class with Honours from RBC in 2019 and has almost completed her MMus. Olivia regularly collaborates with others, which has led to recent prizes including The Ambache Prize for the Performance of Music by Women Composers (1st prize, with the Chrysalis Trio) and The Delius Society Prize (1st prize, with cellist Tom Pickles).

Most recently, Olivia has been playing for orchestral conducting sessions and training for ballet accompaniment through her acceptance on the RBC Elmhurst Ballet Scheme. Outside of performing and accompanying, Olivia is also passionate about music education and helping students to discover their musicality and increase their musical knowledge.

The Joseph Weingarten Memorial Trust Scholarship was inaugurated in 1997 as a bilateral programme for postgraduate study between RBC and the Liszt Academy of Music in Budapest.

Joseph Weingarten was a distinguished pianist who studied at the Franz Liszt Academy, but pursued a long career in London. He was also an outstanding teacher and taught at Birmingham School of Music – now RBC.

The Memorial Trust was endowed by Joseph Weingarten and his wife Lilian to support postgraduate study in piano, violin or voice at RBC and the Liszt Academy. The Trust is managed on behalf of RBC by Birmingham City University.