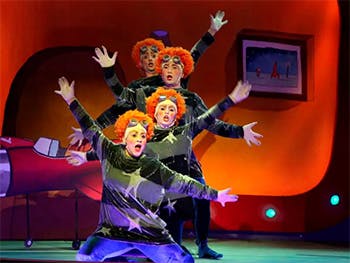 'The Way Back Home' ('Vol retour' in French) gives young audiences of four-years-old and above an introduction to the world of opera. Rory Mullarkey wrote the libretto, based on Oliver Jeffers’ illustrated storybook of the same name, in which a little boy explores the universe in a plane he finds hidden in his cupboard.

Joanna believes it's important to engage young children with music. She says: “All music practitioners have been a child learning music at one stage - I think it’s vital we pass our experiences and zeal on, engaging children from an early age in enriching, positive and high-quality musical experiences."

Opera offers such a rich, imaginative world, an all-encompassing, multidisciplinary art form that is utterly perfect to entertain and stimulate young minds. In turn, children are so imaginative that it’s a perfect excuse to be unrestrainedly creative as an artist!”

This was the debut performance of the French version of the opera, which was first performed in English at the Young Vic in London in December 2014.

Described by The Guardian as "a considerable talent", Joanna's compositions have been shortlisted for a British Composer Award and Arts Foundation Opera Composition Award. Her music has been performed by ensembles including London Symphony Orchestra, English National Opera and Birmingham Contemporary Music Group.

Birmingham Conservatoire's Head of Composition, Professor Joe Cutler is proud of Joanna's success: "This is an incredible and richly deserved achievement for Joanna. It’s a double celebration on top of her recently completed PhD.

"Joanna's work keeps going from strength to strength and she is fast becoming one of the UK’s foremost voices in the world of contemporary opera."