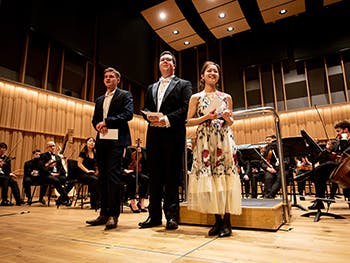 Students at Royal Birmingham Conservatoire, part of Birmingham City University, competed for our esteemed Concerto Prize earlier this month, with the prize eventually being awarded to Tzu-Jo Huang (known as Jojo), who become the first percussionist to win since 2006!

The final of the competition took place in the Bradshaw Hall on Friday 21 June 2019 and saw three RBC musicians performing to win the £1,500 prize money accompanied by our own Royal Birmingham Conservatoire Symphony Orchestra, conducted by Jamie Phillips.

The annual Concerto Prize is a competition for solo performers, and is acknowledged as the Conservatoire’s premier instrumental competition. The winner, Tzu-Jo Huang (Jojo), is currently finishing her MMus at the Conservatoire, and next year will be studying on our prestigious Advanced Postgraduate Diploma course. Jojo was born in Miaoli, Taiwan. Before university she was already successful in competitions in her home country, and while studying at Taipei National University of the Arts, she was a member of Ju Percussion Group and toured across China and Taiwan. In 2015, she studied with Alexej Gerassimez in Germany. For her winning performance, Jojo played the marimba concerto ‘Princess Chang Ping’ by Pius Cheung, based on a theme from the Cantonese Opera, Di Nü Hua, by Tang Ti-sheng.

I was really glad that I had this opportunity to play my own interpretation of this piece with Jamie Phillips and the RBC Symphony Orchestra. They helped me to make this piece of music alive and meaningful. To me, the Concerto Competition is just one of the thousand ways to share my music. After all, sharing stories and delivering happiness to people are both my goals, which I would like to achieve in my musical journey.
Tzu-Jo Huang (Jojo) 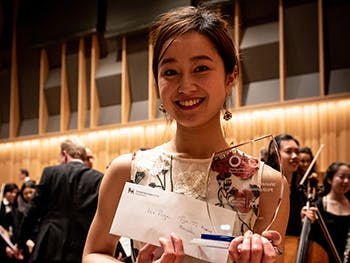 We were honoured to welcome three high profile adjudicators to RBC for the task of selecting the winner of this, the most of prestigious of our prizes, and dividing the prize money between the three finalists. They were David Pickard (Director of the BBC Proms), Stephen Lumsden (CEO of the artists’ agency Intermusica) and Jenny Chadwick (Concerts Director of the CBSO).