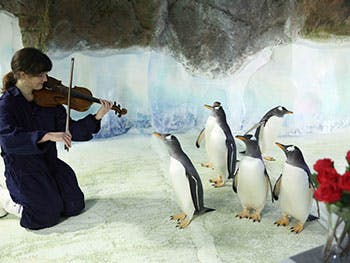 A pair of Gentoo penguins at the National Sea Life Centre in Birmingham have been treated to a private Valentine’s Day serenade by a violinist from Birmingham City University’s Royal Birmingham Conservatoire.

Parents to the aquarium’s baby penguin chicks born last year, Arabel and Pablo have been working hard to raise their young, but like many new parents, they can sometimes struggle to find time for romance amidst the demands of parenthood.

As the attraction now begins to prepare for breeding season, animal care experts at the National Sea Life Centre, with the help of nearby friends at the Royal Birmingham Conservatoire, have rewarded Arabel and Pablo with a well-earned extra special date experience for Valentine’s Day. However, the rest of the colony soon followed behind to see what all the fuss was about.

“Every parent knows it’s hard to get time alone once a little one comes along,” said Jonny Rudd, Curator at the National Sea Life Centre.

With Valentine’s Day being so close to the start of breeding season it was the perfect opportunity to treat our dedicated penguin parents, in the hope we can encourage another successful period of breeding.

Last year, two of the aquarium’s resident penguins Arabel and Pablo became parents to two chicks, nicknamed Hulk and Dumpling due to their sizes. The rare pair are the first to hatch at the centre as part of a global breeding programme after Gentoo penguin numbers declined rapidly. Their parents crossed continents to conceive, coming all the way to Birmingham from as far as New Zealand, Canada and Denmark.

“Students at the Royal Birmingham Conservatoire get to play in some of the world’s greatest venues, but this is certainly the most unique place I’ve performed in! 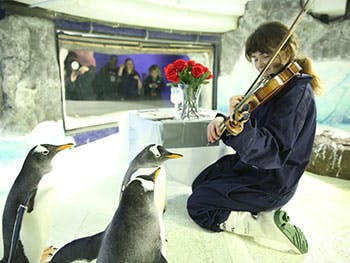 “I am delighted to have played my part in creating such a special Valentine’s Day for the National Sea Life Centre’s infamous penguins and hope that my performance has helped reignite a spark ahead of breeding season.”

Originally from Police nad Metují in the Czech Republic, Markéta is currently in her final year of study on the Birmingham music and acting college’s BMus Music undergraduate course.

Visitors can meet the Gentoo penguin family for themselves at the Penguin Ice Adventure exhibit at the National Sea Life Centre in Birmingham.