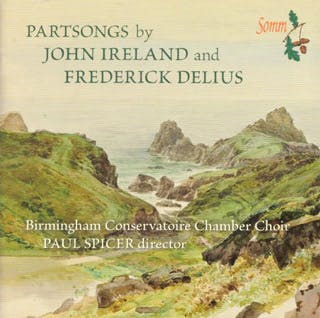 The highly acclaimed Chamber Choir at Birmingham Conservatoire, part of Birmingham City University, has released a new CD and the first of its relationship with the SOMM label.

Recorded in The Church of St Alban the Martyr in Highgate, Birmingham, by Birmingham Conservatoire’s Chamber Choir, the CD’s repertoire is music by English composer’s John Ireland and Frederick Delius.

The music celebrates two major anniversaries, Frederick Delius' 150th and the 50th anniversary of John Ireland's death. Almost all the part songs by Ireland have never been recorded before.

The CD, entitled 'Partsongs by John Ireland and Frederick Delius', is the third recording by the Chamber Choir under the direction of acclaimed Choral Director, Paul Spicer, a well-known composer and writer.

Paul said: “It is many years since the Delius part songs were recorded and a new recording is long overdue. To couple this beautiful but exceptionally challenging music with part songs by John Ireland makes a fascinating coupling, especially as Ireland's secular choral music is almost unknown.

“The Chamber Choir rose magnificently to these challenges and is making a significant addition to the record catalogue with its continuing annual releases. A disc of Sir Charles Stanford's part songs – again almost all previously unrecorded – will be released in the Spring of 2013.”

Birmingham Conservatoire’s Chamber Choir is a small specialist ensemble of twenty four voices, selected by audition. The Choir presents concerts of repertoire from the Renaissance to the present day, both at the Conservatoire and further afield.

For more information about ‘Partsongs by John Ireland and Frederick Delius’ and to purchase a copy, visit www.somm-recordings.com or contact Birmingham Conservatoire.