Opera role is a fairy tale for Birmingham music student 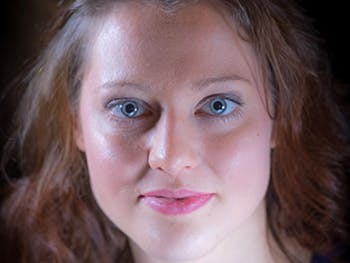 A student from Birmingham City University’s Royal Birmingham Conservatoire is celebrating after being handed the title role in a new production of Gioachino Rossini’s ‘Cinderella’.

Mezzo soprano Hélène Ducos from Toulouse, France will star in the opera, which will be staged in Hinckley’s Concordia Theatre by Stanley Opera in April this year. The production is a funny and modern English translation of the original dramma giocoso by British librettist Amanda Holden.

“I am very excited to rise to the challenge, particularly at this stage of my life, and at the beginning of my career! Rossini is a very demanding teacher, but I am learning a lot thanks to this man.

“My tutor at the Royal Birmingham Conservatoire, Yvonne Sandison, suggested I should study ‘Cinderella’ about a year ago. Without her telling me I was ready to do so, I would probably not have dared!”

After leaving school, Hélène initially studied piano and accompaniment in France at conservatoires in her home city of Toulouse, as well at Montauban and Bordeaux. She subsequently studied for the Sommerakademie voice diploma at the Mozarteum in Salzburg – one of Europe’s most-respected universities for music studies – and is now completing her training at the Royal Birmingham Conservatoire. As well as her musical abilities, Hélène speaks French, English, German and Italian.

Rather than through her fairy godmother, Hélène secured the title role in ‘Cinderella’ after impressing the director during the audition process with her impressive range and previous track record that has seen her play Hänsel in ‘Hänsel and Gretel’ and Polly Peachum in ‘The Beggar’s Opera’.

Stanley Opera are thrilled to be staging Rossini’s great rom-com for the first time at Hinckley’s Concordia Theatre and we are delighted to welcome Hélène Ducos, a dazzling young mezzo soprano training at the Royal Birmingham Conservatoire, who will be our Cinderella.

“We hope that people will take this chance to see Rossini’s gorgeous opera in a great English translation by Amanda Holden, and to catch Hélène before the rest of the world does.”

Rossini’s opera follows the much-loved tale of Cinderella; ill-treated by her two step-sisters and forced to work as a kitchen maid in the household of her step-father, Don Magnifico.

When a mysterious beggar arrives on their doorstep, Cinderella is the only one to show him kindness. When another young man arrives, no-one in the house realises that he is Ramiro – the Prince Charming of Rossini’s story – and he is utterly charmed by the beautiful and tender-hearted maid.