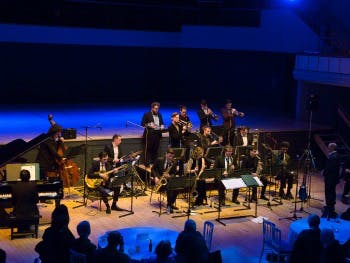 The Birmingham Conservatoire Ellington Orchestra, directed by our Head of Jazz Jeremy Price, has been established to form an integral part of the Conservatoire's Jazz Department and be a regular fixture in the Eastside Jazz Club of our new Conservatoire building, opening September 2017.

The newly formed jazz orchestra hit the scene with a hugely successful debut gig held at the Town Hall on 3 February, entitled ‘Duke Ellington: We Love You Madly’. This first ever set included classics such as ‘Harlem Air Shaft’, ‘Birmingham Breakdown’, ‘Ko-Ko’ and ‘Happy Go Lucky Local’ as well as a complete performance of ‘The Far East Suite’, one of his most famous late works collaboratively written with Billy Strayhorn.

Head of Jazz and Director of the orchestra Jeremy Price comments:

The important thing for the ethos of the Jazz Department and the development of the students is that Ellington inhabits that crucial space between art and entertainment that is so important to jazz. Whenever you play Ellington, it's an object lesson in communication and reaching out to an audience.

The orchestra is made up of students studying at Birmingham Conservatoire, and one of the reasons for its launch is to make Ellington, always a regular feature of the department’s Big Band coaching repertoire, more of a regular fixture. The vision is to allow our emerging jazz musicians to have the opportunity to benefit from the accessible qualities of Ellington, and allow it to influence their own music and how they reach out to an audience.

Far from a retrospective step backwards, the launch of this orchestra fits in perfectly with the exciting new future the Jazz Department has ahead of it in the dedicated jazz club which will be an integral feature of the £57 million new conservatoire. Moving into a state-of-the-art, bespoke jazz space is an ideal way in which to revamp the contemporary jazz scene in Birmingham, giving the city a much needed dedicated jazz venue, and the conservatoire a space in which to realise its ambitions for the future of this hugely successful department.