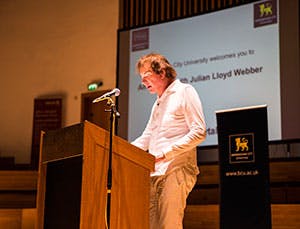 Mr Lloyd Webber used his City Talk at Birmingham Conservatoire, part of Birmingham City University, to applaud the imagination of two cellists who merged Vivaldi into AC/DC’s Thunderstruck, in turn attracting a global social media audience and a tour with Elton John.

“It’s brilliant – Vivaldi metamorphoses into AC/DC in front of a suitably shocked and bewigged 18th century audience. And – most importantly – it’s had over 20 million hits. I’m not talking about selling out - I’m talking about being creative and imaginative.”

Mr Lloyd Webber contrasted this with the majority of young musicians he encounters. “Young cellists come to play to me and ask for my advice on how to become a soloist. Yet they always come with the same pieces – the Bach Suites, the Brahms Sonatas, the Elgar or Dvorak Concertos. They need to get real. Because it is massively unlikely they are going to have a career by playing these pieces.

“How I long for a cellist to come and surprise me with a piece of music I don’t know!"

The international cellist, who retired from playing recently due to injury, lauded the creativity of Laura Mvula, a Birmingham Conservatoire graduate who used breaks between classes to write her own original music. Laura recently landed two MOBO Awards and is set to perform at the BBC’s Late Night Proms next month.

He commended the strong links between Birmingham City University and its Conservatoire, a relationship that he said puts students wishing to promote their work “ahead of the game”.

“Birmingham Conservatoire’s link with Birmingham City University means that it’s joined at the hip with both Birmingham Institute of Art and Design and Birmingham School of Media, which means that you can design a brilliant website for free and make use of superb state of the art facilities for IT and recording.”

In comments widely trailed in the national media, including on Radio 4’s Front Row and in both The Times and Daily Telegraph, Mr Lloyd Webber offered a stinging attack on classical music talent competitions.

“With very few exceptions – the BBC Young Musician of the Year being one of them – they are a microcosm of corruption far more dependent on who studied with who or which teachers are on the jury rather than who is the best player.”

The 63-year-old also addressed the issue of education. He told the latest in the now firmly established City Talk series: “The government needs to back music education more. I don’t think shutting yourself away in a room to learn is appealing to students. I think it’s incredibly sad when students go through their school days and have never heard of Mozart.”