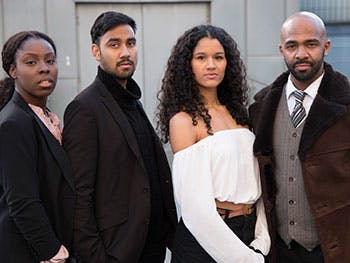 Twenty years after it was first staged at the National Theatre, Patrick Marber’s multi-award winning play ‘Closer’ is to get its first BAME (Black, Asian and minority ethnic) production.

Birmingham City University’s Royal Birmingham Conservatoire Theatre Company has selected a BAME director and four BAME actors for the provocative work which explores the brutal anatomy of modern romance. It plays at The Crescent Theatre in Birmingham from Wednesday 13 until Saturday 16 December.

“’Closer’ is traditionally considered a play for white actors, but there is nothing in the play which directly suggests this requirement. The characters are described as a dermatologist, a photographer, a journalist and a stripper. It's a play about sexual politics, about communication between men and women in contemporary society, i.e. it’s gender specific, not colour or race specific.”

In the 2014 BAFTA Television Lecture, Sir Lenny Henry, now Chancellor of Birmingham City University, was outspoken about the continuing lack of ethnic diversity in British film and TV, calling on the BBC to ring-fence money for BAME productions.

BAME actors cite being offered less important roles, typecasting and the lack of ethnic diversity on casting panels as causes of the difference in their career trajectories compared to their white counterparts.

“The terms ‘BAME’, ‘non-traditional’ and ‘colour blind’ – terms regularly bandied about when there is talk of increasing diversity in the arts – are not only wholly unsatisfactory but also reductive to large swathes of peoples. I personally prefer the term ‘colour aware’ casting and I look forward to the day when the industry status quo is one in which creatives are required to defend any production that is cast ‘traditionally’. The fact that ‘Closer’ has never been cast in this way is an indictment on our industry.”

‘Closer’ was first staged at the National Theatre in 1997 and won the Laurence Olivier Award for Best New Play with the subsequent film earning BAFTA and Golden Globe awards for actors Clive Owen and Natalie Portman.  The plot follows the lives of four strangers as they meet, fall in love, and become caught in a web of sexual desire and betrayal.

“The term ‘colour blind’ casting – casting without regard for an actor’s race or colour – has never sat comfortably with me, as if an actor’s colour is something the audience is required to ‘be blind to’. We really need to continually challenge received traditional casting.

At the Royal Birmingham Conservatoire, we’re at the education end of the theatre industry, training emerging practitioners. Our aim is to foster an environment where student actors can experiment, play and look in a new mirror to challenge perceptions. And not just society’s, but also their own.

“Lack of representation is a challenge that permeates the industry. To see someone who looks like you, doing what you aspire to do, is an important part of sustaining a dream and young people of colour simply don’t have the same multiplicity of role models.”

For more information and to book, visit our events calendar.