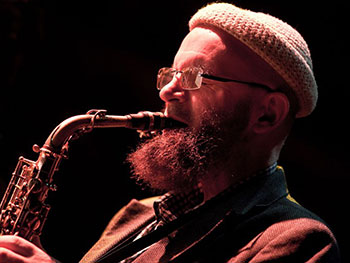 A tutor and a graduate of Birmingham Conservatoire, part of Birmingham City University, are both celebrating after being shortlisted in the British Composer Awards (BCA).

Created by the British Academy of Songwriters, Composers and Authors in 2003, the BCAs seek to promote the art of composition, to recognise the creative talent of composers and sound artists, and to bring their music to a wider audience.

Birmingham Conservatoire tutor Mike Williams has been nominated in the Contemporary Jazz Composition category for SAMA Suite, a piece of work that represents a celebration of living and working in Birmingham.

Mike Williams, Jazz Tutor at Birmingham Conservatoire said: “Having been a Birmingham resident since 2003, I have found the city to be a wonderful place to live. The richness and diversity of its communities – and their integration – is something we are all very fortunate to enjoy.

“For anyone who wants to scratch beneath the surface, one will find a wellspring of generosity and development that supports the city’s being. This commission affords an opportunity to bring together influences from both the jazz and Sufi lineages, which are intrinsic to my identity and in which I have roles.”

The SAMA Suite was commissioned and premiered as part of the Jazzlines series at the CBSO Centre, Birmingham in January this year and invites the listener to travel within a strong jazz aesthetic into the realm of the contemplative, ‘a place to engage and receive’. Five members of the band are graduates of the jazz courses on offer at Birmingham Conservatoire.

Mike added: “Jazz has always had the ability to bring people together within a shared feeling and experience, so for the BCA to feel this project has some merit, on a personal level, is a very nice affirmation. This is particularly so when one considers the incredible creative energy and momentum throughout the jazz community, especially the younger generation where so much fantastic new music is being explored, both in terms of writing and playing.”

This Jazzlines commission represents another in a whole series of progressive initiatives by Conservatoire tutors Mary Wakelam Sloan and Tony Dudley-Evans, notably the Jazz Fellowship awards, and their vision affords the composer an opportunity to reflect the dynamism in the jazz and wider communities running parallel to his own experience.

Teaming up with both skaters and community choirs for the piece, GRIND was performed for the first time last year at the Transition Extreme Skatepark in Aberdeen. The work was commissioned by Tête à Tête opera company and PRS for Music Foundation for the New Music Biennial 2014.

Samuel Bordoli, Birmingham Conservatoire graduate said: “I am delighted to have been shortlisted for a British Composer Award. A huge number of people worked extremely hard to pull this project together, and I think it's fantastic that all the effort has been acknowledged.”

Originally from Bedford, Samuel graduated from Birmingham Conservatoire in 2009 with a degree in Composition.

Studying at Birmingham Conservatoire enabled me to develop the skills needed to work as a professional composer. The experimental, liberal and supportive atmosphere in the Composition Department allowed me to develop work without restriction, which is vital for young composers. I was encouraged to find new ways of presenting contemporary music, without compromise, and imbued with the technical dexterity to do this.
Samuel Bordoli

This is the second time he has been nominated in the British Composer Awards, being shortlisted the Choral category in 2014 for Live Music Sculpture 3 – a work commissioned by the City of London Festival which explored the architectural form and structure of St Paul's Cathedral.

The 2015 British Composer Awards will take place on Wednesday 9 December at the British Film Institute Southbank in London.

BBC Radio 3 will broadcast a programme about the Awards on Hear & Now on Saturday 12 December at 10pm.