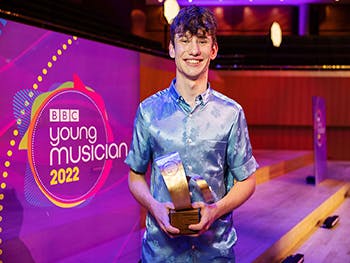 A Birmingham City University music student is celebrating today after being crowned BBC Young Musician of the Year 2022, following a ‘stylish and committed’ performance using a wide range of instruments – from marimbas and crotales to kitchen bowls and car brake drums.

18-year-old percussionist Jordan Ashman, who is in the first year of study for a BMus at Royal Birmingham Conservatoire, was announced as the winner of the prestigious competition at the Grand Final, held at Manchester's Bridgewater Hall.

Speaking after his win, the Royal Birmingham Conservatoire student said: “I feel really lucky to have had the experience of playing an amazing concerto with an incredible orchestra in front of so many people - I've learnt so much from it.

I love the versatility of percussion and it feels like winning has shown so many other people what it can do. I'm really enjoying my first year at RBC, I'm looking forward to working hard and seeing which path it will take me on.

“We are all incredibly proud to have him as part of the RBC community and look forward to being there to support him following such an exciting and pivotal moment in his career.”

The announcement was made during the broadcast of the Competition’s Grand Final on BBC Four and BBC Radio 3 on Sunday 9 October 2022.

Jordan began playing the drum kit when he was seven and soon expanded into percussion.

Jordan impressed the judging panel with a performance of American composer Jennifer Higdon’s Percussion Concerto, written in 2005 for celebrated percussionist Colin Currie, and scored for a mix of pitched and non-pitched instruments. Jordan was accompanied by the BBC Philharmonic conducted by Mark Wigglesworth.

Toby Kearney, Head of Percussion at Royal Birmingham Conservatoire, said: “Jordan's outstanding performance was jaw-droppingly exciting, stylish and committed - his risk-taking playing is full of joy and displays musicality and flair way beyond his years. I'm so proud of Jordan and delighted he chose to study at RBC - what a way to start!

“The percussion department at Royal Birmingham Conservatoire places versatility and employability at the heart of its courses with a cutting-edge curriculum nurturing all students’ strengths and weaknesses individually.