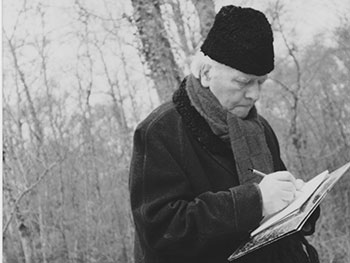 A global authority on the music of French composer Messiaen will see his realisation of an unperformed work receive its world premiere at the BBC Proms in August.

Christopher Dingle, Professor of Music at Birmingham Conservatoire, has devoted much of his professional career to studying Messiaen.

The new piece Un oiseau des arbres de Vie will most likely be the last mature orchestral work to emerge from the catalogue of one of the most influential composers of the 20th century. The composition was previously intended for Messiaen’s final completed orchestral work Éclairs sur l’Au-Delà… (1987-91) and contained his familiar signature ‘Bien’ indicating the movement was complete.

The movement lasts about four minutes and the material comes from Messiaen’s transcription of the song of the Tui, a New Zealand bird. A keen ornithologist, all of Messiaen’s music from the 1950s onwards includes birdsong, while much of his music expresses his Catholic faith.

Christopher Dingle’s research on the piece was supported by the French Music Research Hub at Birmingham Conservatoire, part of Birmingham City University, and he drew on over 20 years’ study of Messiaen’s oeuvre to fully realise the three-stave score.

He said: "From everything we know of Messiaen, it is almost certain that he would have used this movement in another work had he lived longer – it is too good a piece to discard. I am hugely excited about hearing the piece, and this is likely to be the last premiere of a complete mature orchestral movement by Messiaen.

"Birdsong was a fascination of his throughout his life, but he became more rigorous and scientific in his approach from the 1950s onwards. He filled many manuscript books with birdsong notations, and much of it was done in the field, but he also used recordings, working the birdsong into his compositions.

"His use of birdsong is much more sophisticated than any other composer in terms of the species he represented, the interpretation of song, and the notation. He regarded birds as God's musicians, almost like angels."

Un oiseau des arbres de Vie is a challenging piece. The orchestra is very large, the woodwind section including seven flutes and eight clarinets, while there is also plenty of tuned and unpitched percussion, and multiple changes of tempo.

Dingle added: "It’s fast and furious, with the song flying around the instruments and continually punctuated by a punchy gesture for the whole orchestra. I think it will be breath-taking for the audience and leave the conductor and orchestra breathless!"