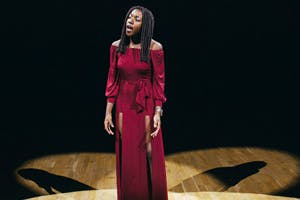 The film is an audio-visual that celebrates how the things in life make us different can also connect us, and acknowledges that every passer-by is on a journey, with a life filled with their own complexities.

Gabriella will also be talking about her four-minute film and the creative process behind it, and answering questions after the première.

Gabriella was commissioned to make the film for the annual film festival, which typically takes place in Scotland, and will run online until 31 October this year. The objective of the AiM festival is to introduce Scottish audiences to African cinema, and to overcome the underrepresentation of African film in British film-going culture.

In addition to filmmaking, Gabriella made her Jazz debut at this year’s Cheltenham Jazz Festival after selling out her Bossa Nova crossover show ‘Juntos A La Par’ in 2020.

Gabriella said: “There is certainly a lot to be said about the ways we are different, and I believe in celebrating the things that make us so. I also believe in the power of acknowledging these things and having a shared curiosity of the world around us and everyone in it.

“We're all connected in such a way that if we slowed down to notice this, every once in a while, the world could be a much better place. I wrote, recorded, edited and filmed everything myself, so this is a hugely personal accomplishment that I feel honoured to share with you."

Book for the première