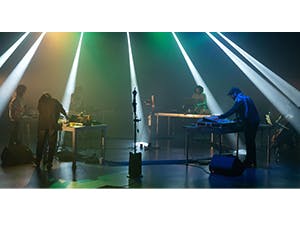 The Iraqi-British composer and multi-instrumentalist, also a musician, researcher, and founder of Nawa Recordings, was awarded the prize at the European event Ars Electronica for the collaborative work ‘Apotome’.

The Isao Tomita Special Prize, named after the Japanese electronic composer who pioneered the use of synthesisers and sequencers in his work, is being conferred on artists who have made an outstanding, innovative and unique contribution to music, this year, and again in 2023 and 2025.

As part of the prize, Khyam will receive prize money of €5,000 and will be supported in the realization of a physical or virtual performance at the world-renowned Ars Electronica Festival in Austria.

‘Apotome’ is the catch-all title for a transcultural music project highlighting the cultural asymmetries, biases, and non-neutrality inherent in modern music-making tools, alongside their interconnected web of musical, educational, cultural, social, and political ramifications.

2020 Ivor Novello Composer Award nominee Khyam Allami performs the Oud, and researches the development of contemporary and experimental repertoire based on the fundamentals of Arabic music, with a focus on music technologies, tuning, and microtonality.

Counterpoint is a creative studio run by Samuel Diggins and Tero Parviainen. Navigating the intersection of design, music, and technology, the duo uses generative systems, interactivity and Artificial Intelligence (AI) in their work.

The award comes in advance of the premiere of new collaboration between Khyam Allami, Tarik Barri and Nakul Krishnamurthy as part of the All Systems Go programme at Centrala in Birmingham on Saturday 3 July 2021. Info and tickets