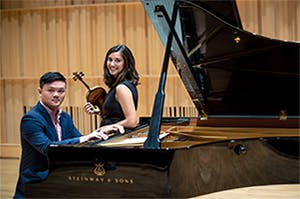 Together they rose to the top, among 40 competitors from 11 different countries. As part of their prize, they will perform at the Wigmore Hall in London on 27 April.

Festival Director and RBC Head of Piano in Chamber Music Daniel Tong said: “Edward and Usha gave stunning performances on their way to winning the 2018 competition. I am so happy that after all our Covid-19 frustrations, they are finally able to make their Wigmore Hall debut. They are worth travelling a long way to see!”

The second edition of the competition, as part of the Birmingham International Piano Chamber Music Festival, will take place at RBC this coming November. As before, all applicants will be heard. Faculty and jury members will perform alongside RBC students and the competing young ensembles, as well as taking part in masterclasses to create a collegiate atmosphere. The grand finale will be livestreamed by Classic FM.