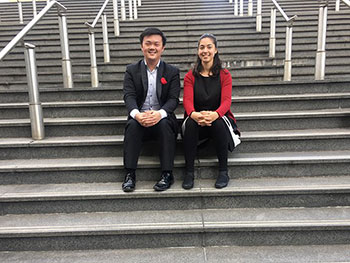 The competition received 40 entries from 11 countries, with eight young ensembles eventually selected to participate and each giving a public recital, as well as taking part in masterclasses with leading artists.

Lauded as one of ‘16 Incredibly Impressive Students at Princeton University’ by Business Insider while a student at the Ivy League institution, pianist Edward Leung has performed in concert halls across North America, Europe, and Asia. He is currently pursuing his Master of Music at Royal Birmingham Conservatoire with Pascal Nemirovski. 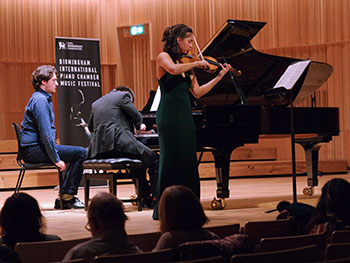 The competition was held as part of the inaugural Birmingham International Piano Chamber Music Festival, which saw 14 concerts and 13 masterclasses take place at Royal Birmingham Conservatoire between Tuesday 20 and Friday 23 November.

“Chamber music is a multi-layered medium, in the wealth and depth of its repertoire as well as the skills and characteristics required to realise it. Royal Birmingham Conservatoire has put chamber music at its heart with inspiring results.

“It is music for sharing, both with one’s performing colleagues and the audience, and is therefore somewhat confessional. It is open to wide-ranging interpretation, despite often being put together by composers with great intellectual rigour.

The jury were delighted that Usha and Edward won the competition and it was extremely well-deserved. The music-making in the Festival generally was of an extraordinary standard, both from the young artists and the professional guests in the evenings.

Following the success of this year’s competition, organisers are hoping to host the event again in 2021.