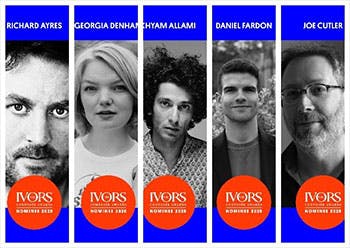 Six members of the RBC community have been nominated for a high-profile Ivors Composer Award, which recognise creative excellence in classical, jazz and sound arts.

The awards comprise 11 categories, which each included a wide range of talent representing established and emerging composers of all ages. The nominees were from diverse settings, and demonstrated a broad range of styles and themes of contemporary music being composed in the UK.

The RBC nominations are as follows:

Solo and Duo Category – BMus alumna Georgia Denham for ‘Kindly, Softly’, composed for violin and piano, and commissioned by Music We’d Like to Hear. Listen here.

Sound Art Category – PhD student Khyam Allami for ‘Requiem for the 21st Century’, with a 16-piece string section, and commissioned by Opera North.

Large Chamber Category – Visiting Professor of Composition Richard Ayres for 'No.50 (The Garden)' for amplified ensemble, bass voice and soundtrack, and commissioned by Asko|Schönberg and London Sinfonietta.

Chair of The Ivors Academy’s Awards Committee Gary Carpenter said: “On behalf of music creators and The Ivors Academy, I would like to congratulate all nominees on their achievement. As our world feels increasingly uncertain, we must treasure what makes life so wonderful – music, inspiration and escape.”

Joe Cutler said: "It's wonderful to see so many of our staff, students and alumni represented here in the nominations for this year's Ivors Composer Awards. We have such a fantastic community within the composition department at Royal Birmingham Conservatoire, and all of us close to it are aware of how much fabulous work is created by both staff and students alike. It's this supportive and nurturing sense of community that allows us the confidence to take artistic risks and not play it safe. It's especially pleasing to see Georgia Denham nominated for a work that was included in her final undergraduate composition portfolio last year, alongside a nomination of current doctoral student Khyam Allami."

The winners of each category will be announced on Tuesday 1 December from 7.30 – 9.30pm, as part of a two-hour ceremony broadcast exclusively on BBC Radio 3. Tune in.