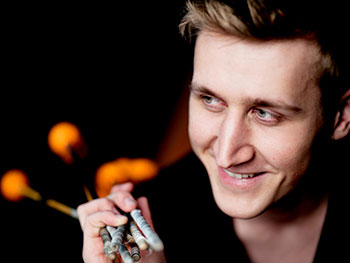 One of the world's leading percussion soloists is to take up a new role tutoring the next generation of performers at Birmingham Conservatoire, part of Birmingham City University.

Alexej Gerassimez begins his exclusive role as International Consultant in Solo Percussion later this month. Alexej made his UK debut in Birmingham earlier this year, when he also held a masterclass with Conservatoire students.

Alexej burst on to the international scene in 2010, when he won the TROMP Percussion Competition in the Netherlands, one of the most renowned international competitions for solo percussion. Hailing from Essen, Germany, Alexej today performs across the world as a soloist and chamber musician, as well as dedicating part of his time to composition.

Alexej has performed as a soloist with orchestras including the Radio Symphony Orchestra Berlin, the Beethoven Orchestra Bonn and the Bochum Philharmonic. His performance activities have lead him to a wide range of European countries as well as to Japan and the USA, where he toured in 2012 as soloist of the Arkansas Symphony Orchestra.

Commenting on his new role at Birmingham Conservatoire, Alexej said:

Learning solo percussion repertoire is so important for students as it gives them skills which transfer to other musical genres. My vision is simply to be a good teacher and find the best way for each student to improve themselves.

"Everybody is different and has their own musical ideas and styles. I want to encourage them to find their own way. My biggest task will be to assist them in doing this and convey my views that passion, inspiration and emotions are essential in music. To be able to continue this work in the University’s state-of the-art new Conservatoire building is truly exciting for me.

"I currently live in Berlin but I love visiting Birmingham, which is an enchanting city full of humorous and inspiring people. I love the pubs, they are so unique. I hope to catch some football too with my favorite Championship team, Birmingham City. It'll be good to see how it compares to Borussia Dortmund, my childhood local team."

Alexej's appointment comes just a few months since Julian Lloyd Webber was announced as the new Principal of Birmingham Conservatoire, confirming the city’s position as a major centre for classical music performance.

"Solo percussion plays a huge part in learning for nearly all percussion students at any conservatoire. There is no substitute for a specialist tutor who is well connected and playing current repertoire in both the public domain and on the world stage.

"Alexej's exclusive appointment is a huge draw for our department which now boasts over a dozen specialist tutors. Not only is Alexej a great player, he is also an impressive composer and his compositions are performed worldwide.

"As part of his Conservatoire appointment, the department has commissioned a percussion quartet to be premiered in the new Conservatoire building in two years’ time."

Building work has now begun on a new £46 million home for the Conservatoire, which will open for teaching and performances in September 2017. It will house a 496-seat auditorium, two additional performance spaces and a range of teaching facilities.