“I can’t imagine ever touring without him”, says Gary Barlow 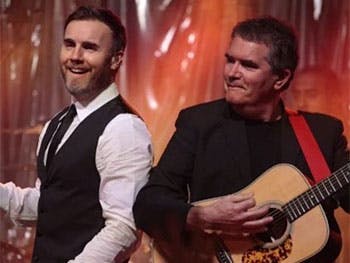 The lead singer of Take That, Gary Barlow has praised music producer Mike Stevens, ahead of a public talk taking place at Birmingham City University this week.

Mike, a Grammy-nominated music producer, and Musical Director and musician for Take That, will look back at his experiences from his almost 30 year career in the music industry, and reflect on his journey from music student to touring with one of the UK’s biggest bands.

Ahead of the talk which takes place on Friday 3 June, Take That member Gary Barlow said:

Working with Mike has been one of the longest relationships I've had in my career. I can’t imagine ever touring without him. His knowledge, leadership and all round talent has been the foundation of my live concerts for 24 years and I’m hoping, another 24 to come!

Mike graduated from the then Birmingham School of Music in 1979, before embarking on a successful career as a saxophonist. Signed by RCA Records in the United States, Mike began touring with artists such as Barry White, Brenda Russell, Dionne Warwick and The Temptations.

In 1992 he started working with newly-formed pop group Take That, who he toured and performed with until they split in 1996, but was rehired when the band reformed in 2006.

Mike’s work with Take That made him an in-demand musical director and subsequently led him to work with artists such as Eurythmics, 10cc, ELO, Will Young, Sugababes, Mika and Geri Halliwell.

As well as looking back on his own career, Mike will also share his tips for those starting out in the music industry.

Mike said: "It's a very good time for live music at the moment. The studio scene and record sales have made it difficult for the studio session musician, but artists are venturing out to play live more than ever now. This doesn't mean it's a given to walk into the world of professional music making, you have to be prepared in all aspects of the business for when that call comes.

"Most people have the practical skills but many need to work on becoming 'the guy' you want to book for the job. An artist wants to feel comfortable with the personality as well as the player these days, talent won’t always see you through."

The talk forms part of Birmingham Conservatoire's City of Sounds Festival. The festival, which was launched in May by the world’s most famous flautist Sir James Galway, celebrates the central role the hall has played in Birmingham’s rich music scene prior to its demolition this summer. It also looks forward to the Conservatoire’s exciting future as it moves to its new £56 million state-of-the-art venue in 2017.