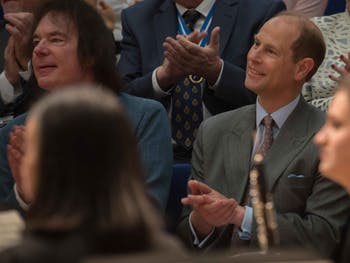 The Earl  was the guest of honour at the historic music school and was treated to a special musical performance before being taken on a guided tour of the state-of-the-art new facilities currently under construction at the institution’s £57 million new home.

On his arrival HRH was led into the Recital Hall where he enjoyed a performance from Colmore Brass, Quintet in Residence at Birmingham Conservatoire, before talking with students about their studies and future careers.

The Earl was formally named as the institution’s first Royal Patron last year, reflecting his strong interest in the arts in both his public and personal life.

Birmingham Conservatoire Principal Professor Julian Lloyd Webber said: “It was fantastic to welcome The Earl of Wessex through our doors again and to give him the chance to see our students perform.

All of us at the Conservatoire are extremely grateful to His Royal Highness for being such a caring and active Royal Patron.
Professor Julian Lloyd Webber

“As our wonderful new building is nearly completed this was the perfect opportunity for us to show him  around the new facility in Eastside and showcase the state-of-the-art facilities that will make our new home a Conservatoire fit for the digital age.”

Part of Birmingham City University and with a history dating back to 1859, the Conservatoire is one of the leading music academies in the country.

Internationally renowned cellist Professor Julian Lloyd Webber took up the role of its Principal in 2015.

The new Conservatoire, which is being built by Galliford Try, will be equipped with more than 70 music practice rooms for musicians and will also be home to Birmingham’s only dedicated jazz venue.