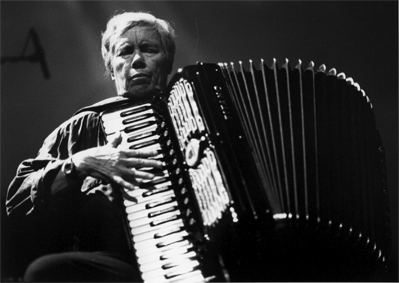 A major festival of music celebrating the sounds and cultures of downtown New York and Birmingham is planned for spring 2014.

Presented by Birmingham Conservatoire and music professionals ‘Third Ear’, Frontiers Festival looks to the collaborative and do-it-your-own-way traditions of New York and the sounds, ideas and iconic moments hailing from that city which have fuelled music culture. Birmingham’s own vibrant music scene, with its strong young voices and bold new work, adds to the programme.

Elliott Sharp brings his graphic score Foliage for a big band improvisation, together with Christian Marclay’s Shuffle, to coincide with SCORE, an exhibition of graphic and text scores in the Library of Birmingham curated by Joe Scarffe and Beth Derbyshire.

Winner of the 2012 John Cage Award, Pauline Oliveros has over the last 50 years established a unique body of work and practices focused on improvisation, meditation, electronic music, myth and ritual. She will lead her ‘Deep Listening Meditation’ to the Ikon Gallery, and directs a real-time improvised performance, linked through the internet, with collaborators in Stanford (California), Troy (New York), and Montreal.

Classic works by Philip Glass are presented by Frontiers’ resident ensemble Decibel, whilst the ‘king of sampling’ Carl Stone presents his latest work Fujiken in which the sounds of south east Asia shape-shift into clouds of sound.

Other events include the Frontiers Marathon, a ‘festival in a day’ with sounds, performance and film; and the UK premiere of Morton Feldman’s Swallows of Salangan performed by Thallein alongside Birmingham Contemporary Music Group.

Further Frontiers events in June include performances of David Lang’s Crowd Out – a new piece for 1000 voices - and a piece for 108 electric guitars by ‘No Wave’ pioneer Rhys Chatham.

Frontiers is a year-round platform including an annual festival for contemporary and experimental music and arts led by Birmingham Conservatoire, part of Birmingham City University. Since 2008, the festival has featured some of the world’s most celebrated composers, including Pierre Boulez, Louis Andriessen, and Heiner Goebbels. The 2014 festival is the most ambitious and wide-ranging to date, with partners including the Library of Birmingham; Town Hall Symphony Hall; Ikon Gallery; BCMG; Flatpack Film Festival; Hotel LaTour; Yorks Bakery Café; BBC Radio 3, UK Guitar Shows; Laney Amps; and Rotosound.

Full programme and ticketing information will be available on www.frontiersmusic.org from 3 February 2014.