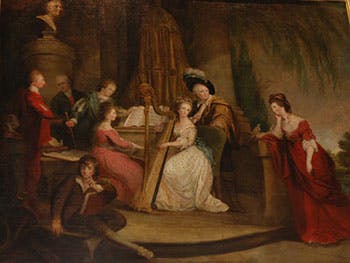 Weston Park in Staffordshire is perhaps most famous today as the Midlands home of V Festival, but research at Birmingham City University is uncovering a musical legacy of the stately home that spans nearly 300 years.

Seat of the Earls of Bradford, the Grade I listed Weston Park still retains a large collection of music, which was used and owned by three generations of the Bridgeman family in the late eighteenth century.

The eldest daughter of the first Baron Bradford of Weston Park, Charlotte Bridgeman collected published music and wrote other pieces she liked at the time in her own manuscript books. All her family’s papers were deposited in the country archives, but her musical collection remained in the Weston Park Archives. It was during research within these archives that Martin Perkins, Head of Early Music and Instrument Curator at Birmingham Conservatoire, discovered the significance of Charlotte’s musical collection in 2013.

Martin is currently researching music-making in the houses of landed gentry in the late eighteenth century. He is focusing on families of a number of large houses in the Midlands, including Weston Park in Staffordshire. After gaining access to Charlotte’s collections, he began compiling her musical life through letters, family documents and the music she knew and played.

Like all daughters of landed families in the eighteenth century, Charlotte was taught music – one of the essential skills of eligible young ladies – and she played the harpsichord from her teens until the time she married. Charlotte also sang and made music with her family, which is well documented in her family’s archives.

However, Charlotte’s life was tragically cut short. From an early age, her health was poor and the prescribed treatment for many ailments at the time – the opiate laudanum – led to an addiction and steady decline of her health until her death, aged just 38.

By piecing together documents in the Bradford archives, and those of her husband, who lived in Solihull, it has been possible to paint a picture of Charlotte’s musical life – of her tastes and preferences, her teacher and musical companions – and to tell the story of her ultimately sad demise.
Martin Perkins, Head of Early Music and Instrument Curator at Birmingham Conservatoire

“Like all women of rank, she had a wide taste in music – from the latest Italian opera to appear on the London stage, to Scottish folk songs. Her collection gives us a wonderful glimpse in to the wide variety of music enjoyed by the landed gentry during that time", added Martin.

Image: Robert Edge Pine – The Bridgeman Family, circa 1782, Weston Park Foundation (Charlotte Bridgeman is seated at the piano in the image)

The event will also be held at the Turner Sims Concert Hall in Southampton at 1pm on Friday 6 November as part of the Sound Heritage symposium.