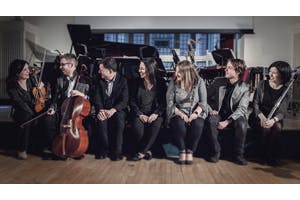 Associate Head of Keyboard Daniel Browell plays piano for the ensemble, which celebrates the diversity and depth of compositional talent working in Ireland today.

The CD was recorded at the Sonic Lab in the Sonic Arts Research Centre at Queen’s University Belfast, where the Ensemble is currently Ensemble-in-Residence.

‘A Terrible Beauty’, which also exists in an orchestral version, has been lauded as a “recommended work” by composers Magnus Lindberg and Erkki-Sven-Tüür, and it is presented in its entirety on CD for the first time.

Hard Rain SoloistEnsemble gives a voice to composers from Ireland and to situate their music in a wider contemporary European and International context. It aims to programme music that otherwise cannot be heard live locally, while serving as an outlet for the talent of specialist performers, acting as a meeting point for their innovation, ideas and enthusiasm.

The ensemble was founded in 2013 by the composer Dr Greg Caffrey, who remains Artistic Director. It is supported by the National Lottery through the Arts Council of Northern Ireland and is a PRS Foundation Talent Development Partner supported by PPL.