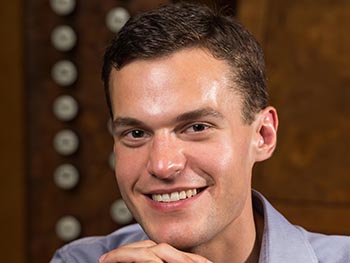 World renowned organist, Nathan Laube, has taken up a new role at the Royal Birmingham Conservatoire as International Consultant in Organ Studies.

In addition to serving on the faculty of the Eastman School of Music in New York as Assistant Professor of Organ, Nathan Laube’s extensive recital career includes major venues spanning four continents.

The appointment will see the Chicago-born virtuoso visit the Royal Birmingham Conservatoire on a regular basis, where he will give recitals, individual coaching and masterclasses for the students, as they seek to be amongst the next generation of great performers.

Nathan Laube’s concert schedule for 2017 includes performances at the Meyerson Concert Hall in Dallas, Notre-Dame Cathedral in Paris and St. Paul’s Cathedral in London. Earlier this year he performed several concerts as Organist in Residence on the famous Müller organ of 1738 in the St. Bavo Church of Haarlem in the Netherlands.

Nathan’s recording of the Stephen Paulus ‘Grand Concerto’ on the Naxos label, recorded with the Nashville Symphony and conducted by Giancarlo Guerrero, won a GRAMMY Award for Best Classical Compendium in 2016. In addition, many of Mr. Laube’s live performances have been featured on American Public Media’s ‘Pipedreams’.

On taking up the role as International Consultant in Organ Studies at the Royal Birmingham Conservatoire, Nathan Laube said:

“It is a great joy and honour to join the distinguished organ faculty of the Royal Birmingham Conservatoire, a Department committed to the highest level of music making at the organ.

As the Conservatoire begins a new chapter in its state-of-the-art new home, it is a particularly exciting moment to join this remarkable team of individuals in cultivating and providing an ever more comprehensive organ pedagogy for the next generation of talented organists.

Furthermore, as the first purpose built conservatoire in the UK since 1987, the £57 million institution which opened earlier this month is the only one of its kind in the country designed for the demands of the digital age.

The Organ Studio at the Royal Birmingham Conservatoire, for example, houses a Eule Pipe organ and features overhead performance lighting and a Dante audio network for flexible location recording purposes.

The venue has a distinctive shape and tranquil atmosphere created by natural light flooding onto the pale wood of the interior. It is completely flexible in terms of the set-up and layout of the performance area and audience seating.

“We are thrilled that Nathan will join us as we embark on this new chapter in the Conservatoire's history. He is a rare talent and among the most gifted performers and teachers in the profession today.

“Nathan is already known to many of our students for his inspirational masterclasses and commitment to organ education. His presence at the Conservatoire will help ensure we are at the leading edge of organ studies in the UK.”

With a history dating back to 1859, the Royal Birmingham Conservatoire is one of the leading music academies in the country. Internationally renowned cellist Professor Julian Lloyd Webber took up the role of its Principal in 2015.

“The Royal Birmingham Conservatoire already enjoys a global reputation as a leading centre for organ studies and Nathan’s appointment will further enhance this. Nathan’s status as an international virtuoso exemplifies the calibre of performers and teachers we are attracting which in turn benefits the future careers of our students.”