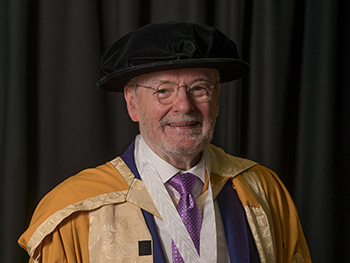 One of the world’s greatest living flautists – Sir James Galway – has received an honorary doctorate from Birmingham City University for his services to music.

Sir James Galway was named Doctor of the University (DUniv) during his only UK residency of 2016, held at Birmingham Conservatoire, part of Birmingham City University.

The residency saw Sir James being joined by his wife Lady Jeanne Galway and together they hosted a series of workshops and masterclasses for flute players. These sessions were preceded by a concert from the duo on Sunday 1 May in the Conservatoire’s Adrian Boult Hall, after which Sir James Galway received his honorary doctorate.

Nicknamed ‘The Man with the Golden Flute’, Sir James Galway is globally renowned as the supreme interpreter of the classical flute repertoire and has sold in excess of 30 million records during a career that spans over 40 years. During this time, the Belfast-born flautist has worked with artists as diverse as Stevie Wonder, Ray Charles, Joni Mitchell, Sir Elton John and Roger Walters, as well as performing on ‘The Lord of the Rings’ film trilogy soundtracks.

Sir James studied in London and Paris before embarking on an orchestral career in London’s major opera and symphonic orchestras. He took up the coveted position of solo flautist with the Berlin Philharmonic Orchestra under Herbert von Karajan in 1969, before becoming one of the very first flautists to establish an international solo career in 1975. As well as receiving a Knighthood for Services to Music in 2001, Sir James received the Gramophone Lifetime Achievement Award in 2014.

I feel very honoured to have been given an honorary doctorate and have been looking forward to spending time with flute players of all levels and ages with great pleasure.
Sir James Galway

“The city of Birmingham has indeed played a great part in my musical career. I first came to Birmingham in 1961 as first flute in Sadler’s Wells Opera. In 1966 the Birmingham Symphony Orchestra sponsored an international wind competition and I shared the first prize with Maurice Bourgue, the well-known French oboe player.

“In the past few years I have strengthened my ties with Birmingham by teaching students from Birmingham Conservatoire.”

“As well as being a leading global performer, Sir James Galway shares our vision in wanting to engage talented young musicians in high quality musical experiences and educational outreach work. It has been a great pleasure for the Conservatoire to welcome one of the classical music world’s genuine legends to play, teach and to receive the University’s highest honour.”

The Galway residency marked the start of ‘City of Sounds – Saying Goodbye to Birmingham Conservatoire’s Adrian Boult Hall’, in conjunction with Greater Birmingham Chambers of Commerce. The festival will mark the Hall’s closure after 30 years, but also look ahead to its new £56 million home in the Eastside region of the City, currently under construction and due to open in 2017.

In between, music fans can look forward to concerts from internationally-renowned musicians to brilliant students including performances by the City of Birmingham Symphony Orchestra – conducted by Conservatoire Principal Julian Lloyd Webber – local folk band The Destroyers and a City Talk by saxophonist and 10cc member, Mike Stevens.