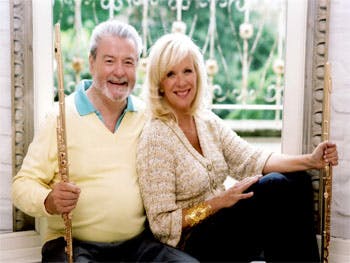 One of the world’s greatest living flautists – Sir James Galway – is to take up a new role at Birmingham Conservatoire, part of Birmingham City University.

Sir James and his wife, Lady Jeanne Galway, have both been appointed as International Guest Professors for Flute.

This appointment will see Sir James and Lady Jeanne Galway visit the Conservatoire for two days next year to deliver masterclasses with students and staff, as well as be involved with specific woodwind events at the institution.

The announcement follows on from the success of the Galway’s two-day residency at Birmingham Conservatoire earlier this year, when they hosted a series of workshops for flute players of all levels and ages during the Early May bank holiday.

These sessions were preceded by a concert from the duo on Sunday 1 May at Birmingham Conservatoire, after which Sir James Galway received an honorary doctorate from the institution.

With a history dating back to 1859, the Birmingham Conservatoire is one of the leading music academies in the country. Internationally renowned cellist Professor Julian Lloyd Webber took up the role of its Principal in 2015, as the Conservatoire prepares to move to a new state-of-the-art facility next year.

My wife and I are delighted to be returning to the Birmingham Conservatoire to be a part of their vision in sharing our expertise with their students in collaboration with the wonderful teaching staff, under the direction of the inspiring Julian Lloyd Webber.
Sir James Galway 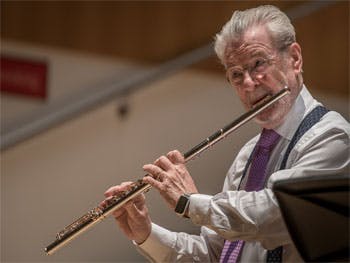 Sir James Galway studied in London and Paris before embarking on his orchestral career in London’s major opera and symphonic orchestras. He took up the coveted position of solo flautist with the Berlin Philharmonic Orchestra under Herbert von Karajan in 1969, before becoming one of the very first flautists to establish an international solo career in 1975. As well as receiving a Knighthood for Services to Music in 2001, Sir James Galway received the Gramophone Lifetime Achievement Award in 2014.

Nicknamed ‘The Man with the Golden Flute’, Sir James is globally renowned as the supreme interpreter of the classical flute repertoire and has sold in excess of 30 million records during a career that spans over 40 years. During this time, the Belfast-born flautist has worked with artists as diverse as Stevie Wonder, Ray Charles, Joni Mitchell, Sir Elton John and Roger Walters, as well as performing on ‘The Lord of the Rings’ film trilogy soundtracks.

One of the leading female flute soloists of the decade, Lady Jeanne Galway is also an accomplished chamber musician and regularly performs in the major cultural capitals of the world. A native of New York, Lady Galway dedicates much of her time to working with the younger generation through her educational articles, masterclasses, blogs and recordings.

"Both Sir James and Lady Jeanne Galway share our passion for educating the next generation of musicians to the highest possible standard, so it is with great pleasure that we welcome them both back to Birmingham Conservatoire in their new roles.

"This is one of a recent series of international appointments which confirms the Conservatoire’s place at the ‘top table’ of global music education."

Woodwind students at Birmingham Conservatoire are offered a wide range of experiences as soloists, in orchestras and as chamber musicians, with much time also devoted to pedagogy in order to strengthen future employment opportunities.

"Following the success of their exclusive residency in May this year, we are delighted that Sir James and Lady Jeanne Galway will return as our International Guest Professors to continue working with and inspiring our students."