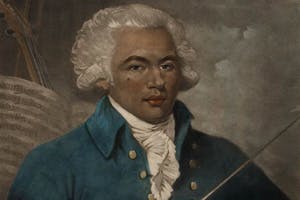 An edition of music by Joseph Bologne, Chevalier de Saint-Georges, prepared by Professor of Music Christopher Dingle, will be performed on Friday 4 November as part of a live BBC Radio 3 concert and broadcast featuring music by composers from diverse cultural backgrounds.

Christopher won funding in 2021 to research the music and history of Saint-Georges, who was born in the French colony of Guadeloupe to an enslaved mother, and rose through French society to become renowned as a virtuoso violinist, composer and conductor.

A Black composer in 18th Century France, the talented Saint-Georges was also regarded as the greatest fencer in Europe, as well as being a formidable marksman, boxer, hunter, swimmer, dancer and ice skater, who played an important role in the French abolitionist movement and led the first Black regiment in Europe.

The BBC’s ‘Forgotten Composers’ concert will feature Christopher’s edition of Saint-Georges’ Symphonie Concertante in B flat, Op.6, No.2, performed by the BBC Philharmonic Orchestra conducted by Ben Gernon in what is believed to be the work’s UK première. The concert will also feature music by the other composers featured in the AHRC/BBC Radio 3 Diverse Composers project, namely Margaret Bonds, Nathaniel Dett, Kikuko Kanai, Ali Osman and Julia Perry.

Christopher said: "It’s such a privilege and really exciting to be involved in enabling this music to be heard again, I can’t wait for the concert."

You can read more about Christopher’s work on Saint-Georges on his website.

Apply for tickets for this event.