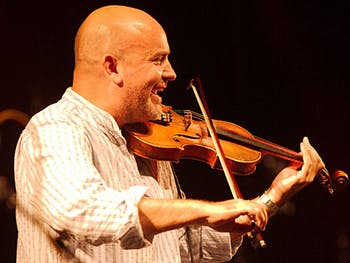 A folk musician and lecturer at Royal Birmingham Conservatoire (RBC) is among members of the Birmingham City University (BCU) community recognised in the New Year Honours list.

Director of the Conservatoire Folk Ensemble Joe Broughton has been awarded a British Empire Medal (BEM) for ‘services to music’.

The Conservatoire Folk Ensemble has 60 band members drawn from current and former RBC students. The group has performed at UK and European concert halls, festivals and venues for 26 years, showcasing talent from across many different music disciplines and instruments at the world-renowned Conservatoire – with Joe at the helm as bandleader, arranger and director.

Joe Broughton BEM said: "It’s amazing to get this kind of recognition for working with the Folk Ensemble over the last 26 years, as well as other projects that have led me to meet and work with many thousands of young musicians from around the world.

“I’ve been running workshops in music for 32 years now and have seen the transformative effect that music can have on people from all walks of life.

To see my students grow in confidence, strength, skill and humour is the biggest reward of course, but getting an actual medal is a great way to celebrate.

Alongside Joe, Senior Lecturer in Psychology at BCU’s School of Social Sciences Dr Atiya Kamal will receive a Member of the Order of the British Empire (MBE) for ‘services to health psychology during Covid’.

During the pandemic, Dr Kamal played a crucial role in helping to understand the psychological impact of Covid-19 on the public, developing ways of supporting those who were struggling, as part of a wider effort during the pandemic.

University alumnus and honorary doctorate recipient, comedian, broadcaster and author Frank Skinner was also recognised with an MBE for his ‘services to entertainment’, while John Crabtree OBE, Lord Lieutenant of the West Midlands and also holder of an honorary doctorate award from BCU, was knighted for ‘services to sport and community in the West Midlands’, after chairing the organising committee of the Birmingham 2022 Commonwealth Games.

The New Year Honours List for 2023 is described as recognising ‘the achievements and service of extraordinary people across the UK’.