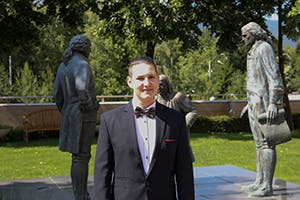 The online competition saw applicants from Russia, China and Italy, with a jury made up of prominent Russian musicians and tutors.

Applicants were required to send in a video of their performance by 20 December 2021, and were judged on their technical proficiency, accuracy, level of difficulty, sound quality, musicality and artistry.

Mario won the Music Prospect category for 19 to 25 year-olds, and was selected as one of the competition’s best participants to perform at the closing gala concert at Rachmaninov Hall, Moscow State Tchaikovsky Conservatory, on 29 January.

Mario is currently studying under Royal Birmingham Conservatoire International Chair in Piano, Pascal Nemirovski, and has a Denis Matthews Memorial Trust Scholarship Award for the duration of his undergraduate studies.

Prior to studying at RBC, Mario graduated from the National School of Music Lyubomir Pipkov in Sofia, Bulgaria, and he has numerous accolades from national and international competitions, including:

Mario said: “To receive the first prize in this age category is a great award and a wonderful recognition."

He added: “I was happy to compete in this competition and wanted to show off the high level of instruction that I receive at RBC.”

Professor Pascal Nemirovski said: “Congratulations to Mario for this well-deserved award, and it will be an honour to represent RBC by performing at a gala concert at the Tchaikovsky Moscow State Conservatory.”