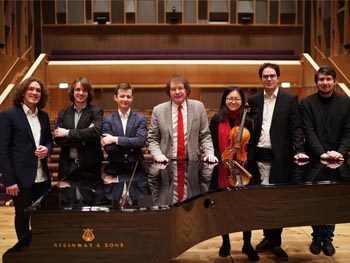 Professor Julian Lloyd Webber, Principal of the Royal Birmingham Conservatoire is delighted to announce the result of the unprecedented partnership recently concluded with Naxos Records, whereby six outstanding students each had the chance to make their all-important debut recordings.

The deal was initially announced in March 2019, with each of the students having spent time in the studios completing their performances.

The recordings in this innovative and fascinating initiative took place in the Conservatoire’s own acoustically-acclaimed Bradshaw Hall for future international release on Naxos Records.

This forward-thinking initiative ties in well with Professor Lloyd Webber’s own philosophy that music students should have the chance to experience as many aspects of the music industry as possibly as an integral part of their overall music education.

The students, all chosen for their exceptional musicianship were pianists Daniel Lebhardt, Roman Kosyakov, Pascal Pascaleff, Andrey Ivanov and Domonkos Csabay together with violist Yue Yu. They have recorded music by
composers as varied as Liszt, Scarlatti and Schumann together with world
premiere recordings of music by Holst, Britten and York Bowen.

Professor Julian Lloyd Webber said:  “I am so pleased that this unique partnership between the Royal Birmingham Conservatoire and Naxos Records has provided its outstanding students with this extraordinary opportunity to record for one of the world’s leading record labels."

I personally recommended all six of these outstanding musicians because I was sure that they would make the most of this unique opportunity.
Professor Julian Lloyd Webber