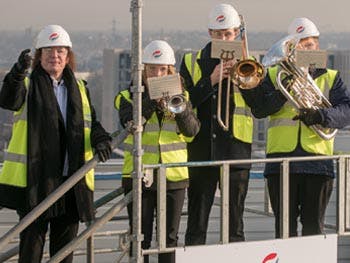 A seven-storey high festive fanfare marked a major milestone for Birmingham Conservatoire’s new home as musicians from the famous music academy performed on top of the £57 million building.

Staff and developers gathered on top of the structure to watch a brass quartet from the Conservatoire play, while the final rooftop bricks were laid and the building took another step towards completion.

Set to open its doors to students in September 2017, the building will boast five public performance spaces - including a new 500 seat concert hall for orchestral training and performance, private rehearsal rooms, and dedicated teaching spaces for musicians.

The move to the new structure in the city’s Eastside will mark a new era for Birmingham Conservatoire, having previously been housed in Paradise Place.

It will become the first purpose built musical academy to be constructed in the UK since 1987 and will include state-of-the-art digital facilities to meet the demands of the modern musician.

ProfessorJulian Lloyd Webber, Principal of Birmingham Conservatoire, said: “Today is a real step forwards on the journey towards moving into our fantastic new home.

“This space will give our students even better facilities to learn, practice and perform, and help them to truly nurture their talents while they are with us.

“When we open our doors, this will be the only conservatoire in the country which has been specifically designed to cater for the demands of the digital age.

I honestly believe that there will never be another purpose-built Conservatoire in the UK, so this is a fantastic opportunity which we are looking forward to seizing with both hands.
Professor Julian Lloyd Webber

Part of Birmingham City University and with a history dating back to 1859, the Conservatoire is one of the leading music academies in the country.

Internationally renowned cellist Professor Julian Lloyd Webber took up the role of its Principal in 2015.

The new Conservatoire, which is being built by Galliford Try, will be equipped with more than 70 music practice rooms for musicians and will also be home to Birmingham’s only dedicated jazz venue.

Keith Lilley, Project Director for Galliford Try, said: “The topping out ceremony is always a key part of the construction process when we can really see the building coming together.

“The Conservatoire represents one of the most technically challenging projects around and we are delighted with the progress we have been able to make so far, and look forward to delivering a world-class facility for the University.”