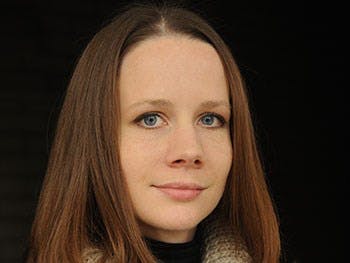 Joanna Lee, who earlier this year became the first composer to have a children’s opera premiered at English National Opera, has been commissioned by the BBC Proms to compose a new work to be performed by Birmingham Contemporary Music Group at London’s Royal Albert Hall on Saturday 25 July.

The special concert has been planned to celebrate the 90 birthday of composer Pierre Boulez.

Originally from Suffolk, Joanna specializes in contemporary vocal music, music theatre and opera and is currently completing a PhD in composition at Birmingham Conservatoire, part of Birmingham City University.

“I am thrilled to be composing for the BBC Proms”, said Joanna.

“I am particularly excited that the piece is for Birmingham Contemporary Music Group - an ensemble I first encountered at Birmingham Conservatoire and a truly fantastic group to write for”.

Patrick will work closely with the orchestra over the next year, culminating in a new work for the London Symphony Orchestra to be unveiled in March 2016.

“Since my first encounter with orchestral music when I was a teenager, the fantastic organism that is the Symphony Orchestra has bewildered me”, said Patrick.

“It is with great pleasure and thankfulness that I take part in the London Symphony Orchestra Panufnik Scheme. It’s an amazing opportunity for me to refine my composition skills for orchestra, and most of all to work with one of the best orchestras in the world.”

Professor Joe Cutler, Head of Composition at Birmingham Conservatoire said, “It’s extremely exciting that our research composers are gaining such public exposure for their wonderful work. It shows what a dynamic community of composers we have at the Conservatoire.”