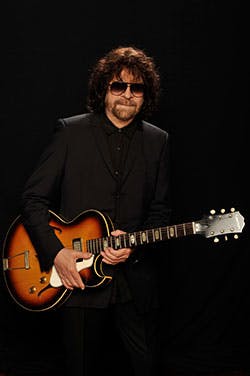 Jeff Lynne - singer, songwriter, producer and driving force of ELO (Electric Light Orchestra) - is to receive two honours in his hometown of Birmingham next month.

He will be awarded an honorary doctorate degree by Birmingham City University on Wednesday 5 March and the following week will receive his very own “star” on Broad Street's Walk of Fame, joining the likes of Tony lommi, Frank Skinner, Ozzy Osbourne and Lenny Henry.

Jeff has had highly successful production, writing and solo careers, including his body of work with the 50 million record selling Electric Light Orchestra.

As a producer he has collaborated with some of the biggest names in music including Roy Orbison, Del Shannon, George Harrison, Paul McCartney, Ringo Starr, Tom Petty, Joe Walsh and The Beatles. Together with Harrison, Orbison, Petty and Bob Dylan he was a member of the Grammy award-winning Traveling Wilburys.

In 2014 Jeff is still working hard on his music and recently contributed a new track for the multi award winning film and Oscar hopeful, ‘American Hustle’.

“I'm extremely touched and very proud of both these awards”, said Jeff. “I'm highly honoured and that's a fact. To be recognised for something you love to do is a wonderful thing, and I'd like to thank everyone involved. The fact that I'm being honoured in my hometown makes it really extra special. ‘Everything comes to 'im wot waits’ as my dad used to say!”