It's official: Birmingham Conservatoire is the best 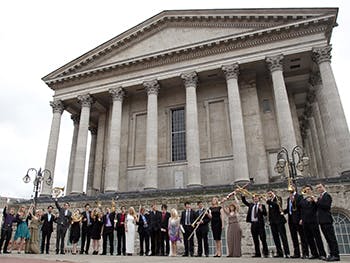 The Conservatoire scored 91 per cent for overall satisfaction, outperforming all other UK counterparts – including Royal Colleges – in the 2015 National Student Survey (NSS) results.

Professor Lloyd Webber said: “It is testament to the commitment of our extraordinary staff that the NSS results places the Birmingham Conservatoire as the leading conservatoire in the UK for student satisfaction. They work tirelessly to ensure every student realises his or her full potential.

“There is a misconception that the only place to train as a musician is in London. But with world-class concert halls, such as Town Hall and Symphony Hall, and close connections with leading orchestras such as the City of Birmingham Symphony (CBSO) supporting the training delivered by our exceptional staff, a young musician can receive all the training they need to compete in the modern music industry right here in Birmingham.”

The recognition comes only a week after Professor Lloyd Webber launched building work on a new £46 million home for the Conservatoire, set to open in 2017.

Combining these superb student satisfaction results with the prospect of moving into our new, state-of-the-art building, there has never been a better time to study at Birmingham Conservatoire.

“Our aim is to coach our students to elite levels of musicianship but to do so a friendly, supportive environment; clearly they are thriving on this and have made their satisfaction clear.”