Concert to showcase disability is no barrier to musical talent 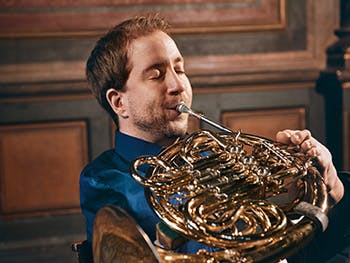 Birmingham City University’s Royal Birmingham Conservatoire is welcoming some of the world’s most gifted performers for a unique concert that proves disability is no limit to musical talent.

Comedian Al Murray will host The OHMI (One Handed Musical Instrument) Trust Gala Concert on Friday 7 September which will feature performances by Felix Klieser and The Petry Sisters – who all play with their feet.

Virtuoso French horn player Felix Klieser will be making his UK debut at the Gala Concert as part of the 2018 OHMI Conference, which is also taking place at Royal Birmingham Conservatoire on Friday 7 and Saturday 8 September. Performing Mozart’s Horn Concerto No 4., Felix is an ambassador for the OHMI Trust, a UK-based charity which pioneers the development and adaptation of musical instruments for physically disabled people.

Despite having been born with no arms, Felix Klieser took up the horn at the age of four in his native Germany. Now 27, he plays with the instrument fixed into a specially-design stand and operates the valves with his left foot. With his right foot, Felix operates a rolling stand which enables him to change the sound of the horn with a mute. Felix has won the Leonard Bernstein Award, and performed as recitalist and soloist with ensembles as varied as the Berlin Philharmonic Orchestra and with singer-songwriter Sting on his world tour. 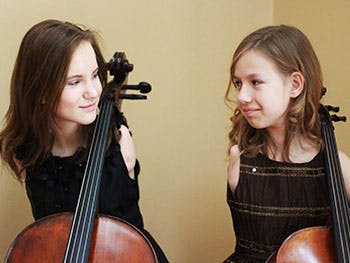 Inga Petry and Elena Petry – known as The Petry Sisters – were born in Siberia and adopted by US music teacher Jennifer Petry, who also works as a director and consultant for music students with special needs. Although Inga did not have arms, she insisted that she get her chance to play, and began cello lessons on a viola placed at her feet before she turned three years old. Inga is now 18 years old, studies cello and has performed all over the US and across the UK.

Elena Petry began cello lessons at the age of eight, also studying with her mother. She plays on a 7/8 cello granted to her by the PLAY Foundation, and uses an adaptive cello holder and bow holder made for her by May We Help, the volunteer, non-profit organisation in Cincinnati that has worked with both girls throughout their musical studies. The pair will play Vivaldi’s double cello concerto at the Royal Birmingham Conservatoire concert.

Established in 1982 by the friends and family of RAF flying ace Sir Douglas Bader, The Douglas Bader Foundation advances and promotes the physical, mental and spiritual welfare of physically disabled people. The foundation’s musical arm, Bader’s Big Band, is the first ever big band to be formed entirely of disabled musicians and highlights the benefits that music can bring to those whose lives are affected by disability.

Any deficiency or disability in one hand or arm makes traditional instruments unplayable to any reasonable standard. As a result, millions across the world are excluded from music-making for the lack of suitable instruments. This includes people with congenital disabilities such as cerebral palsy and hemiplegia, amputees, those who have suffered a stroke or developed arthritis.

To overcome this, the OHMI Trust runs an annual competition to encourage inventors, designers and instrument makers to develop a musical instrument that can be played without the use of one hand and arm, and that has all the characteristics and facility of a traditional instrument.

In collaboration with Birmingham City University and Queen Mary University of London, the 2018 OHMI Conference at Royal Birmingham Conservatoire encompasses the annual competition award and will also explore the barriers to music-making faced by people with physical disabilities.

The conference will bring together current multi-disciplinary research with, among others, the experiences of disabled musicians, teachers, charities, funders, and government agencies. Recently developed instrument designs will also be demonstrated.

​The challenge to enable full and undifferentiated participation in music for people with physical impairments is a subject only recently receiving attention. It is hoped that sharing knowledge through this conference will stimulate further and more rapid developments in the coming years.