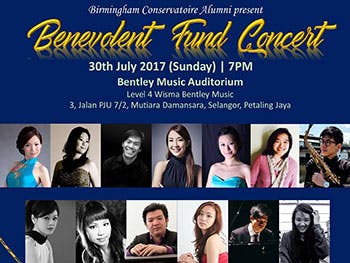 Malaysian graduates from Birmingham Conservatoire are coming together to host a fundraising concert in Petaling Jaya that will support the next generation of talent to study at the UK music institution.

Saxophonist Eddy Lim will lead his band Jazz Voyager to provide music in the foyer pre-concert and during the intermission. Meanwhile, the Malaysian performers will be joined by Taiwanese alumni and pianists, Peng I-Hsuan and Liao Pei-Chun, the latter being selected as ‘2009 Young Star of the National Concert Hall’ in her native country.

The new benevolent fund, which can be used towards living expenses and further music training activities, is the idea of pianist and Birmingham Conservatoire alumna, Jeanette Wong, from Kuala Lumpur.

Since 2009, she has worked exclusively for the institution assisting with student recruitment in Malaysia and Singapore, and it was through developing relationships with Malaysian students, as well as reflecting on her own experiences, that she saw the necessities of such a fund:

“Coming from a humble background, I was faced with huge financial difficulties during my postgraduate year after having exhausted both my parents’ support and a personal student loan from Malaysia following my previous undergraduate studies.

“Seeing some of the students from a similar background having to work part time, I wanted to help, so that these talented musicians can spend their time in Birmingham doing what they set out to do all the time instead.

“Although Birmingham Conservatoire offers a range of scholarship opportunities for international undergraduate and postgraduate scholars, I felt more could be done for Malaysian students. I was delighted that a whole host of former students wanted to help me too, and the fund and charity concert came together rather quickly as a result of their passion for Birmingham Conservatoire and Malaysia’s emerging musical talent.”

Part of Birmingham City University, Birmingham Conservatoire is a world class institution providing exceptional training for the musicians, actors, stage managers and performers of the future, being the third highest ranked UK conservatoire for music in the Guardian University Guide 2018.

In March 2016, HRH Prince Edward, The Earl of Wessex, became the Conservatoire’s first Royal Patron. Birmingham Conservatoire is preparing to move to a new state-of-the-art £57 million home later this year, which will include five public performance spaces.

My time at Birmingham Conservatoire was one of the most wonderful and memorable experiences in my life. It has made a huge impact on my career and opened many doors for me professionally. It was there that I was able to grow and mature independently as a musician in a very supportive environment, which is so important for any young musician.

“During my time in the UK as a whole, I have made many lifelong friends and have met some of the most talented and gifted people on this planet! Living abroad changes you and I'm very glad that I chose to come to the UK, which has become my second home.”

Birmingham City University is the UK’s biggest producer of creative professionals outside England’s South East, and is the country’s most successful recruiter for art and design in Malaysia and China.

‘Birmingham Conservatoire Benevolent Fund Concert’ has been supported by both Bentley Music Academy and Pastorale Conservatoire in Kuala Lumpur.