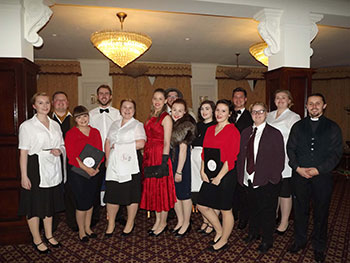 The classic board game ‘Cluedo’ has been brought to life in its home city, with live actors replacing the familiar suspect figurines and Birmingham’s historic Macdonald Burlington Hotel doubling as Tudor Mansion.

‘Cluedo’ was invented in the Birmingham suburb of Kings Heath between 1943-45 and launched by Waddingtons in 1949. The object of the game is to determine who murdered the game's victim, Dr Black.

The live action ‘Cluedo’ was an immersive murder mystery event in which participants must find out who killed Dr Black, by helping Detective Diggory Brown question suspects and search for clues.

The 40-minute long event took place in the Macdonald Burlington Hotel where all suspects have been kept for interrogation.

As part of the Stage Management course, the students were tasked with setting up their own immersive theatre company and finding a historic location in Birmingham that they could transform to highlight its history.Operating as Tagline, the students took inspiration from ‘Cluedo’ and its Birmingham origins at a time when escape rooms are becoming more and more popular.

Anthony Pratt was a musician and would frequent mystery parties in the 1950s in hotels and manor houses. It was therefore fitting that the students selected the Macdonald Burlington Hotel, with its period features offering the perfect setting to recreate a 1950s-set immersive event that echoes the period when Anthony Pratt was working in hotels.

“As part of the Stage Management final year, students have to create a theatrical event based on a venue’s historical background. Working as a group they are responsible for all elements of the event from venue liaison and logistics to creative content.

This year the team have done an excellent job of creating ‘Cluedo’ as a murder mystery event at the Macdonald Burlington Hotel, taking one of their function suites and transforming it into the various rooms within the game, with the well-loved and familiar characters occupying each area.

“Detective Diggory Brown guides the guests through the spaces leaving them to spot the clues and hopefully solve the murder. It's a great combination of old fashioned board games and the current escape room trend. I’m so proud of all the students, they have worked exceptionally hard and it shows just how talented they all are!”

Over 140 years old, the Macdonald Burlington Hotel has welcomed Beatle George Harrison and comedy film legends Laurel and Hardy in the past. It was also where Enoch Powell delivered his infamous ‘Rivers of Blood’ speech in 1968.

“The Macdonald Burlington has always been an iconic location in Birmingham so we are pleased to be a key part of the student’s activities. The event is great fun and the staff have loved seeing the actors bring the game to life. I urge people to come and take part in a real life ‘Cluedo’ game.”

Formerly known as the Midland Hotel, the property also serves ‘Birmingham spring water’ from its own source – a borehole deep beneath the hotel where tunnels, once used to move mail between Birmingham New Street railway station and the Colmore Row business district, have survived.

Sophie Spillane is the Co-Production Manager for ‘Cluedo’. She said:

“As third year Stage Management students, we have gained a variety of skills by working in multiple roles within a production department. We have created ‘Cluedo’ for our final year project and, after being given a brief by the University, we independently created the company Tagline and are very proud to perform our first show with the support of our tutors and fellow students. This project has given us great insight into the industry and has given us a taste of what life will be like after University.

“In our version of ‘Cluedo’, each session can accommodate up to 15 people, so it would make a perfect activity for family and friends over the Bank Holiday. Having said that, we’re almost sold out, so I’d encourage budding sleuths to get their tickets soon to avoid disappointment.”