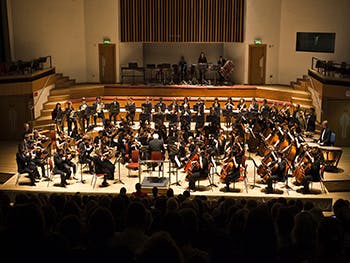 After 30 years of offering live classical, jazz and experimental music performances, Birmingham Conservatoire’s Adrian Boult Hall will hear its last note on Sunday 26 June – but not before it is celebrated in style as part of a two-month long music festival.

Birmingham Conservatoire has announced ‘City of Sounds – Saying Goodbye to Birmingham Conservatoire’s Adrian Boult Hall’, in conjunction with Greater Birmingham Chambers of Commerce. The festival will mark the Hall’s closure, but also look ahead to its new £56 million home in the Eastside region of the City, currently under construction and due to open in 2017.

‘City of Sounds’, opens on Sunday 1 May with a celebrity recital from world famous musicians Sir James and Lady Jeanne Galway and closes on Sunday 26 June with Birmingham Conservatoire Symphony Orchestra performing Verdi’s ‘Requiem’ conducted by Sir Richard Armstrong – which will also be broadcast live on BBC Radio 3.

In between, music fans can look forward to concerts from internationally-renowned musicians to brilliant students including performances by the City of Birmingham Symphony Orchestra, local folk band The Destroyers and a City Talk by saxophonist and 10cc member, Mike Stevens.

Aaron Diaz from The Destroyers said:

Many of us have studied at the Conservatoire  at one point or another – at the last count there were nine Birmingham City University graduates in the band – so it's a treat to play one of our few Birmingham shows this year in a venue we once performed as bright-eyed students!

“Our partners in crime for this fantastic double-header send-off for the Adrian Boult Hall are the inimitable Conservatoire Folk Ensemble led by Joe Broughton. We’ll be performing earlier than our regular performances, which promises to make the gig a great family event.”

The Adrian Boult Hall is the next in a series of buildings being demolished as part of the £500 million Paradise regeneration project, which has already seen the loss of the brutalist Birmingham Central Library.

“This is such a fitting end to one of the great Birmingham attractions, for which the Chamber has been delighted to play its part over the years. We look forward to an amazing new home for the Conservatoire and know that its great history and traditions will continue to be part of the fantastic cultural achievements of the city.”

Often described as one of the best concert halls of its size in the country, the 520-seat auditorium was opened in 1986 by HRH the Duchess of Gloucester. Since then, it has welcomed diverse performances from well-known names such as violinists Nigel Kennedy and Tasmin Little, Conservatoire Principal and cellist Julian Lloyd Webber, singer Dame Felicity Lott and composer Pierre Boulez.

As part of one of the leading music academies in the country, Birmingham Conservatoire students have always remained integral to the Hall’s programme. Its stage has been graced by alumni including soul singer-songwriter Laura Mvula, baritone Rhydian Roberts and conductor Michael Seal.

“I wonder if Birmingham will ever have seen so many of its extraordinary musical organisations gathered together under the same roof!

“The Adrian Boult Hall has been at the forefront of Birmingham’s cultural mix for the past 30 years, so it is fitting that we are marking its closure with a magnificent festival.

Although we are saying goodbye to the Adrian Boult Hall, ‘City of Sounds’ is also the perfect signpost for what’s to come. The new Birmingham Conservatoire will be the first of its kind purpose-built for the digital age and, along with our new auditorium, audiences will be able to enjoy Birmingham’s only dedicated jazz venue.

The Adrian Boult Hall was named in honour of the renowned English conductor, Sir Adrian Cedric Boult. He was conductor of the City of Birmingham Orchestra from 1924 to 1930, before the BBC appointed him as its Director of Music. Among many accolades in his career, Sir Adrian conducted the first performance of his friend Gustav Holst's ‘The Planets’ in 1918.

Birmingham resident Tim Walton attended one of the Adrian Boult Hall’s first concerts in 1986 and, after enjoying over 1,000 performances at Birmingham Conservatoire, he will be present for the Hall’s last show in June this year. He said:

“The Conservatoire’s Adrian Boult Hall is an exceptional performance venue and I have become rather attached to it. Indeed, I will miss it, but the new Conservatoire looks incredible and the facilities available to students will be second to none.

“I have heard some incredible concerts in the Adrian Boult Hall over the last 30 years and was also fortunate enough to be able to perform with first year students in the late 1980s and early 1990s. This included singing in the choir for a performance of Verdi’s ‘Requiem’ in 1992, so I am delighted that the piece has been selected for the Adrian Boult Hall’s final concert.”

‘City of Sounds’ runs from Sunday 1 May until Sunday 26 June at the Adrian Boult Hall, Birmingham Conservatoire. Between the closure of the Adrian Boult Hall and the new building opening, Birmingham Conservatoire will be presenting a full programme of concerts in its Recital Hall, as well as at partner venues across the City including Town Hall, Symphony Hall, Elgar Concert Hall – Bramall Music Building (University of Birmingham), CBSO Centre, St Philip’s Cathedral, St Paul’s Church and the Rep Studio Theatre.

For a full list of events and to purchase tickets visit the City of Sounds festival page.