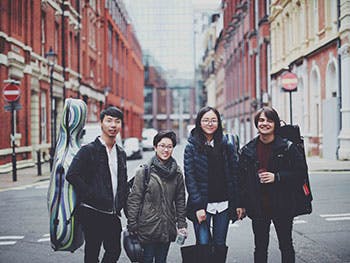 Shoppers in Birmingham are in for a treat, as classical musicians from China, the UK and South Africa will be performing a series of pop-up shows to celebrate Chinese New Year.

Comprising a mix of traditional Chinese and Western pieces, the performers – all from Birmingham City University’s Royal Birmingham Conservatoire – will host concerts in iconic locations such as the Bullring, one of the UK’s busiest shopping centres, and Selfridges department store.

Performances will also be taking place between Friday 16 and Sunday 18 February in Birmingham Cathedral, Grand Central shopping centre and the Patrick Studio at Birmingham Hippodrome, the latter having organised the Chinese New Year Festival in the city.

Among the performers will be 20-year-old violist, Yue Yu, who performs as part of The Fletcher Quartet. Yue, from Shenzhen, won the award for Best Sonata Performance in the Cecil Aronowitz International Viola Competition and Festival held last year.

Speaking ahead of the Chinese New Year Festival in Birmingham, she said:

“As a student at the Royal Birmingham Conservatoire, we get to perform in some of the world’s leading music venues, but performing in a shopping centre is certainly unique! It will be interesting to see the surprised faces of shoppers and visitors when we begin to perform unannounced, but I hope they appreciate the varied repertoire we will be playing. 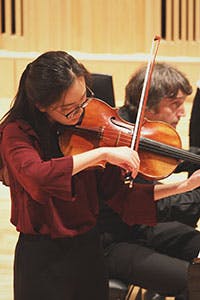 “I am missing lots of friends and family back home during this special time of year, but getting to perform some of my favourite traditional pieces makes me feel closer to my birthplace, and I am delighted to be able to share it with people of Birmingham.”

One in five students at Birmingham Conservatoire originates from China – more than any other UK music college. Meanwhile, Birmingham City University is the most popular destination for art and design among Chinese students who choose to study in the UK.

Other performers taking to the stage as part of the Conservatoire’s Chinese New Year Festival include the winner of the International Robert Schumann Piano Competition, International Germany Irmler Piano Competition and Champion of the Instrumental Solo at the Abergavenny Festival of Music, Nga Anna Vienna Ho. Originally from Hong Kong, Anna is currently studying towards an Advanced Postgraduate Diploma at the Royal Birmingham Conservatoire, under the tutelage of Anthony Hewitt and Margaret Fingerhut.

“Throughout its history, the Royal Birmingham Conservatoire has nurtured some of China’s leading classical musicians, most recently Di Xiao from Guangzhou, who was named in the top 10 up-and-coming Chinese pianists by ‘International Piano’ magazine.

It is therefore fitting then that, to mark the Year of the Dog, some of our current rising stars from China, Taiwan and Hong Kong will be showcasing their talents across the city of Birmingham as they prepare to embark on their own international careers.