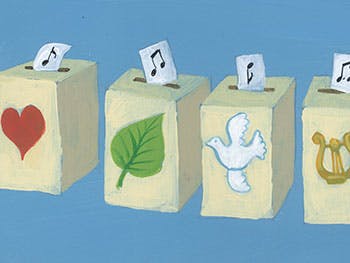 With less than a week to go until the polls open for the EU referendum, the British public are being invited to participate in another European decision – on which six songs will represent the UK in the inaugural European Union Songbook.

Founded in Copenhagen last year, the European Union Songbook aims to showcase the best music to have originated in all 28 EU member states throughout history, combining national sentiments with an underlying European identity.

Regardless of the outcome of the EU referendum on Thursday 23 June, organisers have stipulated that the UK will remain eligible to feature in the new Songbook.

Already more than 13,000 EU citizens from Denmark, Germany, Sweden, Austria, Greece, Latvia and Cyprus have voted and chosen their songs, with the UK vote opening on Tuesday 14 June and closing on Thursday 14 July.

34 songs representative of Britain and its musical heritage have made the UK shortlist, following a vote last year by music teachers and students from British music academies, including Birmingham Conservatoire, part of Birmingham City University.

Songs by The Beatles dominate in the six categories, including love, freedom and peace, and faith.

“The EU Songbook brings together various manifestations of an important aspect of our great European musical heritage and it's an aspect that could so easily be lost. How wonderful that among longer established UK songs are several more contemporary offerings, for a living tradition is one that is constantly evolving.”

David served as Principal of Birmingham Conservatoire from 2011 until 2015 and is now an Emeritus Professor of Birmingham City University. He is also Organist and Director of Music at Saint Chad's Metropolitan Cathedral in Birmingham.

The UK Song voting bill features music from the Renaissance up to modern day, with a number of British composers appearing multiple times including Robert Burns, John Lennon and Paul McCartney; the two latter having a record seven nominations among all 28 EU member states, including classics like ‘All You Need Is Love’, ‘Let It Be’ and ‘Imagine’.

The EU Songbook is scheduled for publication in May 2017 with all song lyrics being printed in both their original languages and English, accompanied by notes. Further plans would see all songs translated in to the 24 official EU languages, enabling all citizens to sing the 168 songs in their mother tongues.

The contest is being run by the non-profit European Union Songbook Organisation, which was founded by Danish journalist Jeppe Marsling. He said:

Clearly, the British public are facing a major decision with the EU referendum on June 23. Whatever happens in that vote, we will still recognise the UK’s membership for the time being and welcome them to be part of the first European Union Songbook.

“If we EU-citizens want to take the step from the economic – coal, steel and fish – to the social and cultural, we need to take ownership of the Union, since it first of all belongs to us all. Due to the overwhelming Americanization and the lack of common languages in the EU, we all know painfully little about each other's cultures, yet we live parallel lives. To share national song treasures seems to be a direct way out of the EU-estrangement towards getting to know each other better.”

The song vote for the UK takes place at www.eu-songbook.org from Tuesday 14 June until Thursday 14 July.