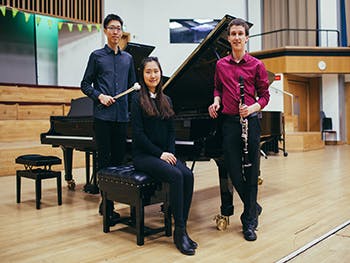 The concert will include Liszt’s technically-demanding First Piano Concerto, Finzi’s evocative Clarinet Concerto and ‘Prism Rhapsody – A Concerto for Marimba and Orchestra’ by Keiko Abe. John Foulds’s tone poem ‘April – England’ and Berlioz’s ‘Les Francs-Juges’ complete the programme. This year, the occasion is particularly special as former Prize winner Michael Seal returns to conduct the orchestra. As a violinist, Michael Seal won the Ludlow Philharmonic Concerto Prize (as it was then known) in 1991. He is now Associate Guest Conductor of the Birmingham Philharmonic Orchestra, as well as Associate Conductor of the City of Birmingham Symphony Orchestra.

Since 2013, the finalists have been accompanied on the platform by the Birmingham Philharmonic Orchestra (BPO), one of the UK’s finest amateur orchestras. The BPO is currently celebrating its 75th anniversary with concerts marking the contributions of its five former music directors including David Ludlow, after whom the Prize was originally named.

This competition is a collaborative project between Birmingham Conservatoire, part of Birmingham City University, and Birmingham Philharmonic Orchestra and is unique among UK conservatoires.

The chance to take part in this famous competition, and to perform a concerto with such an expert orchestra as the Birmingham Philharmonic, is a fantastic experience for these students as they take their first steps on the professional ladder. And for the audience, this will be an exciting opportunity to hear three exceptional musicians in an afternoon of thrilling performances.
Julian Lloyd Webber, Principal, Birmingham Conservatoire

Following a semi-final round with piano accompaniment, three finalists are chosen to perform in a concert accompanied by the BPO. The involvement of the BPO is regarded as a great step up for the standing of the Prize, the BPO and the Conservatoire itself. All involved are working together to ensure that the competition continues to go from strength to strength.

The Birmingham Philharmonic Concerto Prize Final is at Adrian Boult Hall on Sunday 24 April at 3pm.

For further information and booking details, visit the concert and events page.