Welcome to Series 3 of ‘Passing the Baton’ where members of the Royal Birmingham Conservatoire community talk to each other about life in the time of Covid-19.

Hello, Dani. How are you today and how has your 2020 been to date, broadly speaking?

Hi Lyle, really nice to speak to you and I hope you are doing well.

2020 (including today) has been like a rollercoaster, probably more of a mental than physical one. I’m used to moving around town between different projects, meetings, rehearsals, etc. I like living outside; for me it’s a sort of comfort, relax zone. However, the moment when all aspects of life happen mainly at home, the day to day seems to become foggy and messy. Things need to keep happening because the fast-paced momentum of society hasn’t changed, but the previous frame has shifted and now work and leisure, public and private life, happiness and struggle stay in the same place – and that’s a challenge.

However, I feel lucky. I was able to visit my family back in Spain safely this summer and my time here hasn’t been too bad. I’ve been more or less able to work. For that, I have my Harry Potter-like-under-the-stairs-little-studio where I can focus. I like having sound and noise in the background, sounds of life happening – maybe that’s why I really like composing in cafés, a practice sadly risky nowadays – and this space in the house makes it possible. 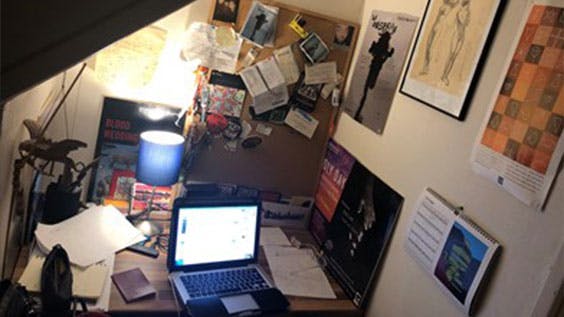 Talk us through your work, research and music from the past nine months. Has the Coronavirus pandemic had any positive or negative impacts on your professional journey?

I work mainly creating music for stage. Although I try to compose music as much as possible not to be performed on a stage. In the past two years, I have been creating shows to be performed specifically in breweries, museums and art galleries. Most of them have been under the umbrella of Infinite Opera, the company I co-founded with the librettist and soprano Roxanne Korda. Following on from that, this year I have been working on an opera called ‘The Flowering Desert’ about an exoplanetary system (TRAPPIST-1) to be performed in planetariums in collaboration with astrophysicists working at the University of Birmingham, and also a protest street theatre hoodening play about working rights and digital slavery as part of an Erasmus+ project at Goldsmiths, University of London.

If there has been a positive impact of the Covid-19 pandemic, I guess it would be the extra amount of time I have had to reflect on my practice; challenging the ways I compose and thinking about how I could be more innovative with my work. This is how I was working with the team of ‘The Flowering Desert’. Instead of rushing the creation of the opera to meet a deadline, we decided to explore in depth some of its characters and create a set of extra pieces in a video format.

A negative impact was that Infinite Opera’s trilogy ‘Besse’ was going to have its Spanish première in a chamber music festival in Valencia last June and, obviously, it was cancelled. It was a very exciting project working with young talent playing with musicians from Valencia Opera House. Hopefully this can happen in 2021. We also had more cancellations, such as the original première date of ‘The Flowering Desert’, also in June. Luckily in March, we were still able to perform a short piece based on a statue by the artist Naum Gabo commissioned by the Barber Institute of Fine Arts. 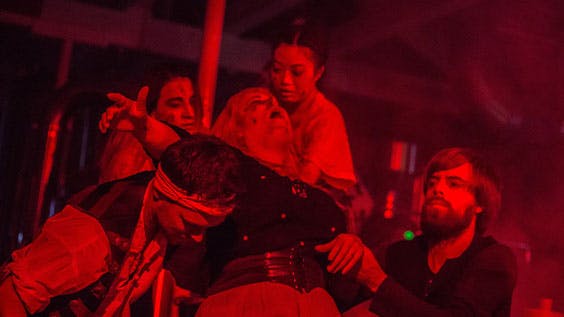 What does your working day look like – do you have a routine, preferred workspaces, and what helps to get you through the day?

Oops! It seems I spoiled the response to this question a bit before.

I have to say that I am not really following a routine as such. I am part of several projects happening at the same time, and the schedules for meetings and workshops can be a bit messy. Besides, and following on from what I said before, this current fogginess of everything happening at home allows some creative meetings to happen quite late or during weekends when the schedules of the whole team can find a little bit of shared time.

I normally organise my day around these meetings and workshops. The first and most important questions are: “What will I make today for… breakfast/lunch/dinner?” Once that is set, around cooking and meetings, I compose, organise my projects, do some admin, write ideas down in a notebook, play trumpet, improvise on the piano, edit some music or videos, etc.

I try to (de)organise many small activities. I keep changing to make every day as fresh and new as possible.

Sometimes, I also try to organise things with a clear objective of doing something different. For example, yesterday I said to myself, “Tomorrow I’ll have breakfast in the garden if it’s sunny. It’ll be great and it’ll make my day”. I checked the forecast just in case, as you can imagine it would normally rain, and probably the day this is published, it will rain, but today I had breakfast in the garden and it was sunny and great and made my day, believe me.

What have you been listening to of late and do you have any musical recommendations – old or new – for our readers?

For several months I have been listening literally to the following:

Maybe this video would help you understand what’s going on.

This is a moment when the sad Prince laughs at the evil witch Fata Morgana. It’s a bit ridiculous, I know – even more when the whole orchestra and chorus laugh together later. For a month or so, I was a bit obsessed with the second act of Prokofiev’s ‘The Love for Three Oranges’ and specifically this moment. I was cured of this, but now I’m going to go and listen to it again…

I guess I am fond of the excessiveness of opera. I find it amusing and engaging at the same time.

On a slightly odd note, I have also been compulsively listening to a theme from Studio Ghibli’s weirdest, but really cool movie Pom Poko. Please watch the Spirit Parade scene – it’s totally worth it.

Catching on the folk element, maybe call me radical, I was using Stravinsky’s ‘Les Noces’ to do yoga this summer after coming back from Spain with some extra kilos.

Music aside, I have also been listening to some comedy podcasts in Spanish where they talk about cinema and history. Following that, I have been reading a bit about cinematographic techniques and as a result carefully watching movies and TV series. There’s a lot there I can apply to my own practice.

In the six years since arriving from Valencia to study in Birmingham, you have built up an incredible list of collaborations, awards and experience. Do you have any particular highlights or memorable moments?

When people ask me about Birmingham, I always say that this is a city that you learn to love. It requires you to be an active part in that process. Then, you really do. I will never forget when I arrived in Birmingham for the first time six years ago. Arriving at the airport at night after a three-hour flight from Spain. The sudden change of temperature from Valencia’s warm 30 degrees in the evening to the rather chilly minus 600 degree, with 3,567 per cent humidity of Birmingham. People say it’s because of the canals, but who knows? Butterflies in my stomach, heading towards the unknown, quite literally.

With a relatively large amount of luggage, I caught a bus as I didn’t know there was a train from Birmingham International to New Street at that time. Instead of a quick trip on the train, I enjoyed – truly, no irony here – a 40-50-minute journey on the front seat on the first floor of a bus, being left in the dark at Digbeth Coach Station. That was fine, I was young and brave (ha!).

What I will never forget was my first impression of the city: a 30-minute walk towards my student accommodation crossing the most luxurious and well-lit parts of Digbeth and Deritend at midnight. Love at first sight? I didn’t run back.

Another memory I especially treasure because of what it meant for who I am right now and what I do, is my first collaboration with the Birmingham School of Acting (now part of RBC). At the beginning of my second year in Birmingham, I met the director Lise Olson to start a collaboration to compose music for the play she directed ‘The Sins of Sor Juana’. What seemed a logical partnership – a play set in New Spain and a Spanish composer – became what Lise later called serendipity.

The collaborations with Lise triggered a cascade of other projects, reaching a peak of composing music for a dozen plays in less than two years – exactly 12 from June 2016 to June 2018. Following this experience composing music for theatre, I later jumped into composing opera, co-founding Infinite Opera and into funded doctoral training for a PhD in Performing Arts. Serendipity.

I don’t want to make this too long. Another time we can talk about other memories, such as when I broke a lift with a set of timpani on the day of my final major project – creating a beautiful fractal pattern on the glass, when I composed a whole year’s composition project at 4am on the day of the deadline after spending the evening at the Post Office (blink, blink), or when I went to a café and I asked for a quadruple espresso (don’t ask).

How would you describe RBC and music in Birmingham to someone unfamiliar with both the Conservatoire and the city’s musical landscape?

Call me cheesy, but I think Birmingham’s motto “Forward” describes it perfectly. At RBC I always liked its ecosystem, which is rich and innovative. People have the will to explore and create, and it’s a mixture of home grown professionals within the institution or the city, and, therefore, with a special sense of belonging, and professionals from around the world; both bringing their unique perspectives. The result is a thrilling environment where everyone’s voice is respected and embraced, favouring collaboration not only among students, but among the whole community.

About Brum, I find it’s a place where the most incredible blends, fusions and combinations are possible. The city hosts worldwide renowned institutions in almost every single stream of music, which serve as models to follow and/or challenge generation on generation. At the same time, it hosts a variety of visions and ideas from people with completely different backgrounds with the humility and the interest to keep exploring, creating something new and innovative.

In a moment when the world struggles with ideas of “purity” and certain traditions are being defended through confrontation with anything that’s different, let’s keep this “Forward” motto with humility, embracing our different backgrounds and cultures and creating new art that challenges the flaws of these current times. 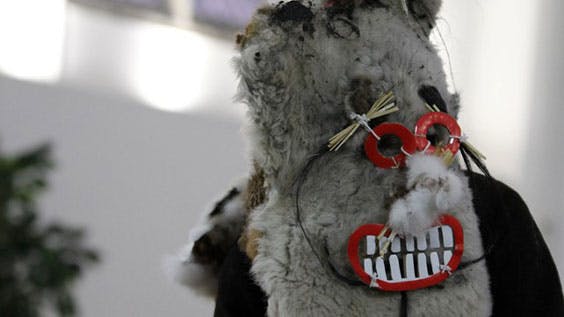 Bonus Content: Lyle and Dani continued their conversation via a Zoom chat. Click on this link to access this bonus material. Thanks to Lyle and Dani for taking the time to do this and especially to Dani for editing the video.