Amos Miller has been Head of Brass at RBC since September 2018, having spent the previous 23 years as a freelance trombone player and teacher.

Over my career I’ve worked with most of the UK’s orchestras, played for many film soundtracks, and taught in a huge variety of contexts, ranging from the Royal Air Force to the Royal College of Music, and led classes in arenas from Primary Schools to the Juilliard. Since joining RBC, switching to having a regular place of employment has meant a big change in working style, which I am thoroughly enjoying.

I am especially relishing being in a position to emphasise to our students the importance of physical and mental well-being. Aside from the obvious point that everybody deserves to be happy – and that can be a journey that takes some work for a significant number of people – this is an area that has a huge impact on our development as musicians.

Playing an instrument to a high level can be an intensely emotive experience; it has generally been part of our lives from a very young age, we may have ‘stuck out from the crowd’ at school in a way that felt negative, the work we need to do is never finished, and we can frequently feel the weight of both historical judgement and peer-based competition on our shoulders as we practise and perform. There are also significant physical demands, the evolution of musical instrument shapes certainly didn’t have ergonomics as a driving influence!

So, as my career has trundled along, I have become more and more interested in the interaction between the mental and physical aspects of performance. Musicians, especially in the UK, are frequently expected to perform at the highest levels despite schedules that are incredibly demanding (I have been on tours where there have been 8 flights, 8 concerts, and 8 hotels, all crammed into 8 days!) we need, therefore, to be prepared to cope with these challenges in a healthy and functional way by developing our resilience.

When I was studying, these were areas that were addressed somewhat sparsely, if at all. Although there were individual teachers who cared very deeply about the well-being of their students, the prevailing ‘corporate’ attitude, in terms of both acknowledgment and provision, was more ‘sink or swim’!  I am very definitely not singling out a particular institution, (having been extremely happy at my alma mater!), however this was a wide issue across the whole sector, and one which led to several of my acquaintances not fulfilling their potential for a whole range of reasons. This feeling of ‘missed opportunities’ has informed my own teaching ever since: I feel it is our responsibility as teachers to work to understand the whole person to enable the students to unlock as much of their potential as possible. Frankly, that is also what makes teaching so enjoyable!

Better awareness of the importance of well-being has certainly become much more widespread over the last few years. I’ve been genuinely impressed by the level of engagement at RBC, and with the pastoral commitment that both the instrumental and academic staff demonstrate on a daily basis. Classes such as Alexander Technique are available across the Conservatoire and all students have ready access to the BCU counselling services, but in addition each department within RBC has its own bespoke classes and events, including, for example, Yoga for the Vocal faculty, ‘Peak Performance’ workshops and Pilates for Woodwind, and Mindfulness classes which started in the Brass Department in September, and have now expanded to include the Woodwind and Keyboard Departments, with the hope to roll it out to the whole institution (including staff) in September.

I have also introduced a class for the first year brass cohort to help bridge the gap between secondary and tertiary education, which can seem like an enormous leap! We covered a huge range of topics, which developed organically as the term proceeded, including:

A large number of these topics come up regularly in performance classes and rehearsals as well. For me, the key factor in discussions of well-being is that it is clearly and publicly stated that it is absolutely OK not to feel OK! We all have times in our lives when things can be difficult, and I am proud to be associated with an institution that acknowledges that and provides constructive support and education to enable you to graduate with the all the requisite tools with which to enter professional life ready for anything! 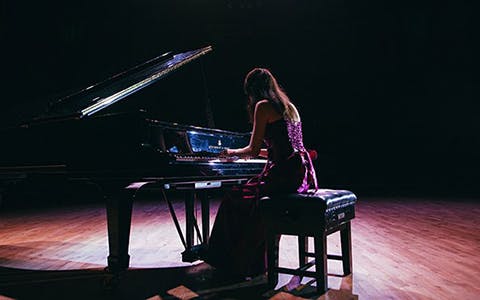 A world class institution providing exceptional training for the musicians, actors, stage managers and performers of the future.

Our 12 Plays of Christmas

Why I chose to study Music at Royal Birmingham Conservatoire