Birmingham youngsters hitting all the right notes on charity EP 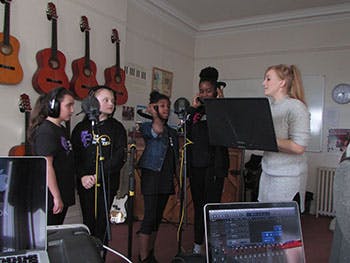 Drama students aged between six and 18 have teamed up with Birmingham Conservatoire to record a Christmas charity CD in aid of Birmingham St Mary's Hospice.

The six-track EP features 73 youngsters from Birmingham's Theatre Workshop performing arts school, based at the Priory School in Edgbaston. The EP will be available for purchase from Saturday 5 December and costs £5.

Utilising the Conservatoire's top-of-the-range recording facilities and expertise, Theatre Workshop have recorded a mini album featuring classic songs from films and musicals, including Flashlight (Pitch Perfect 2), Who I'd Be (Shrek) and With You (Ghost the Musical). The EP closes with Santa Claus is Coming to Town, a classic Christmas song given a 1970s twist by the youngsters, as they infuse it with riffs from ABC by The Jackson 5.

The CD features three soloists from the school who were picked after making the finals of Talent Fest UK earlier this year. Thomas Ashen, Jessie Miah and Olivia Moore represented Theatre Workshop at the finals of the nationwide talent competition in Blackpool's Winter Gardens back in September, with Jessie finishing second in the country.

The recording of the charity CD forms part of the wider Learning and Participation programme recently launched by Birmingham Conservatoire, part of Birmingham City University, and which aims to engage talented young musicians from diverse backgrounds in high quality musical experiences. As well as arts organisations such as Theatre Workshop, the programme sees the Conservatoire work with schools and charities, both locally and nationally.

"We were amazed by the standard of the young singers in this recording; they all sound like professionals at the age of 14! We are really pleased that the Conservatoire has been able to support such a great initiative to raise money for an excellent cause in the run up to Christmas.

Birmingham Conservatoire is committed to developing partnerships such as these with local arts organisations – providing new and inspiring experiences for young performers and, at the same time, raising funds to support good causes locally.

Theatre Workshop traditionally support a local charity over the festive period with a live performance, but this year it was decided to do something different and give the students an opportunity to experience what it is like to work in a professional recording studio.

"It's been an amazing opportunity to work with Birmingham Conservatoire on this worthwhile project for charity. The students have thoroughly enjoyed this professional experience and we hope to work with the Conservatoire again in the future."

Copies can be bought from Birmingham St Mary's Hospice in Selly Oak and Birmingham Conservatoire in the city centre. Alternatively, the CD can be ordered directly and posted out from Theatre Workshop. Please contact Suzy Bleasdale for all orders via suzy@thetheatreworkshop.com