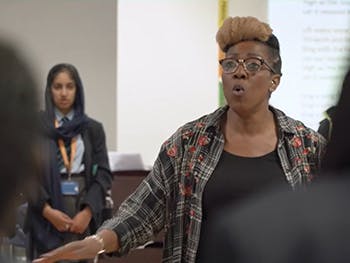 Featuring celebrated Birmingham-born Gospel artists Audrey Mattis, Ray Prince and Gary Hayles, Lift Every Voice and Sing will be released via streaming services on Wednesday 8 December 2021, with all proceeds going to the homeless charity Shelter.

Professional voice coaches and conductors from the Conservatoire have rehearsed the 43 beginner students of the CORE, US vocal group since September. During their exciting journey, the Year 8-10 students have been taught how to breathe, warm up and use their body to get the best sound. Having challenged themselves to aim high and deliver a polished performance, they are now ready to take their place alongside professional artists for this recorded performance.

Lift Every Voice and Sing – often referred to as the Black national anthem in the United States – is a hymn set to music for the anniversary of President Abraham Lincoln's birthday in 1900. It was chosen for its message of equality and inclusion, values shared by both the Trust and the Conservatoire.

This moving song sends a powerful message of courage and freedom. As it once gave a voice to subjugated black Americans, we now hope it will give a voice to those who need help in finding a safe home this Christmas and need to be heard. It has also given us all a privileged opportunity to hear from the young people of CORE, US who represent a voice of hope in our city.

Adrian Packer CBE, CEO of CORE Education Trust, said: “I am immensely proud of CORE, US, who have worked tirelessly as a team to produce something truly magical and meaningful. Under the inspiring leadership of the Royal Birmingham Conservatoire, they have grown into confident singers ready to perform proudly alongside professionals. The students have missed out on so many enriching experiences because of the pandemic, so I am thrilled they have been given this joyous opportunity - and that they’ve used the privilege to do real good for others.”

Sophie Gaye, Year 9, City Academy, said: “I’m looking forward to singing for lots of different people - telling them why we are part of CORE, US and spreading our message.”

Christina Fopa, Year 8, City Academy, said: “I enjoy the community and singing together. I am really pleased that we will be giving to charity, people need help and can’t always access it, like we can. We should give our all to our community.”

Muntash Mohamed, Year 8, Rockwood Academy, said: “I like that being part of CORE, US gives us an opportunity and responsibility and a chance to show ourselves. I think it’s wonderful that we are able to think about others and help them through the sale of this single”

Lift Every Voice and Sing from CORE, US and Royal Birmingham Conservatoire will be released on all major streaming sites on 8 December 2021. The track can also be downloaded from Just Giving and Shelter, where donations can be made.