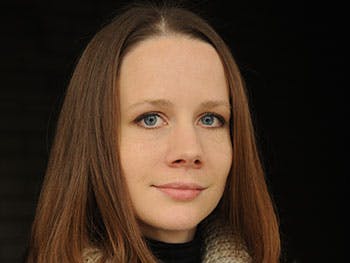 A student at Birmingham Conservatoire, part of Birmingham City University, has composed the score for the English National Opera's first ever show for children this December.

'The Way Back Home' is an opera adaptation of Oliver Jeffer's children's book of the same name, which follows the journey of a boy who crash lands on the moon and comes face-to-face with a stranded Martian.

Joanna Lee, originally from Suffolk, has composed the opera's score and has been described by the Guardian as a "considerable talent, capable of creating vivid musical images", with her compositions previously being shortlisted for a British Composer Award and Arts Foundation Opera Composition Award.

Specialising in contemporary vocal music, music theatre and opera, Joanna is currently completing a PhD in composition at Birmingham Conservatoire.

"The Way Back Home is a wonderful project to bring contemporary opera to a young audience, something which seems vital to inspire future generations of musicians and ensure the longevity of this genre," said Joanna.

"The opera aims to maintain what the creators would do ordinarily in their artistic disciplines, but in a way that is fun, engaging and relatable to children.

"Alongside the two main characters there is a chorus of Gizmos who create all the sounds in the world using their voice, for example the buzzing of an aeroplane's engine and the squelching of walking through mud.

"Visually, the opera affords stunning scenery and the creative team hopes the show will be an engaging experience for little and big kids alike."

Suitable for children aged between five and eight years old, 'The Way Back Home' runs for 40 minutes and has been created by Katie Mitchell and Vicki Mortimer, the pair behind the hit stage adaptation of Dr Seuss's 'The Cat in the Hat'.

Professor Martin Fautley, Director of the Centre for Research Education at Birmingham City University, said: "Music education is a vital part of the education of young people. We know that the UK is a world leader in the creative economy and equipping our young people to play a part in this is vital for our future development. This venture with the English National Opera offers children an exciting opening into the world of serious music, as well as sparking their creative imaginations."

Find out more and book tickets for 'The Way Back Home'