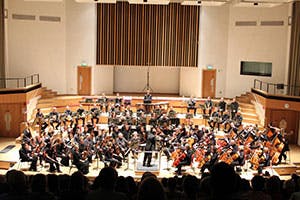 Students at Birmingham Conservatoire, part of Birmingham City University, are to perform alongside the esteemed Birmingham Philharmonic Orchestra (BPO) next week as they compete for the BPO Concerto Prize.

The BPO Concerto Prize is a competition for solo performers, organised and staged by Birmingham Conservatoire in association with BPO and is acknowledged as the Conservatoire’s premier instrumental competition.

Originally known as The Ludlow Prize, the competition was founded in memory of David Ludlow, who was a widely respected and talented violinist who conducted the BPO in its formative years.

Twenty-two-year-old Emily, from Kettering in Northamptonshire, said: “I feel very privileged to be chosen to play with a high quality orchestra, such as BPO. Rehearsing for the concert has been an exciting process and I’m sure it will be a highlight of my career so far.”

Adjudicating this year’s competition is Peter Stark, conducting professor at the Royal College of Music.

Winners of the Prize are eligible for a substantial cash award at the discretion of the Trustees of the Prize.

Click here for more information and to book tickets.