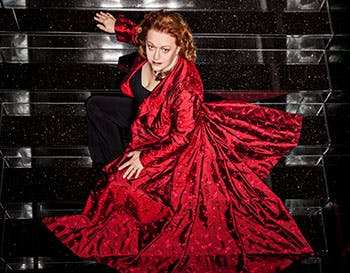 The global opera star has been presented with the Wagner Society Reginald Goodall Award for outstanding service to Wagner and his music.

The award is not given out regularly and is only presented when an individual or theatre group has been identified by the Society’s committee as being worthy of recognition.

Catherine was chosen for the award in part for her performance of ‘Brünnhilde’ at the Bayreuth Festival in Germany, which she has been performing in for the last five years.

Nottingham-born Catherine initially qualified as a midwife before joining Birmingham City University’s Royal Birmingham Conservatoire in 1995 where she studied for a Music degree. In 2014 Catherine was awarded an Honorary Fellowship by the University for her work as an international singer.

Since her time at Royal Birmingham Conservatoire, Catherine has gone on to become a star in the opera world, performing pieces by Wagner in venues around the world including France, Germany, Italy, China, Japan, Spain, Turkey and, more recently, the United States.

“The hardest thing I had to do was resign as a midwife but, as I stood there with my resignation in my hand, I thought if I stay here I will always be thinking what could have happened.

“I have had many people help me on my journey; my tutor Pam Cook MBE – so very, very sadly missed – and Royal Birmingham Conservatoire together gave me my first step up into the professional world of singing by offering me a place on the undergraduate course with really nothing more than a voice and a huge determination to succeed!

“I will be forever grateful for that and proud to call Royal Birmingham Conservatoire the place where it all began.”

This is a fantastic achievement by Catherine and we are always delighted to see our alumni achieve success on this scale!

Catherine’s award is well-deserved recognition both for her talent and for her persistence in pursuing her dream.

She has been awarded the Silver Medal from the Worshipful Company of Musicians in London in 1997, which she was nominated for by Royal Birmingham Conservatoire.