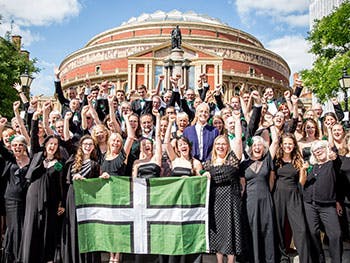 North Devon Sinfonia, an orchestral group founded by graduates of Birmingham Conservatoire, has been announced as the winner of  a nationwide search for the orchestra that best captures the spirit of great British amateur music-making in the UK.

The orchestra was named the winner of the BBC contest, ‘All Together Now: The Great Orchestra Challenge’, in the finale of the four-part series which aired on BBC Two in September.

Husband and wife, Dan and Emma Kent, founded North Devon Sinfonia in 2004 and both studied at Birmingham Conservatoire, part of Birmingham City University.

The Sinfonia’s line-up is rich and varied, and includes a cheese maker, lupin grower, postman, and a number of doctors and teachers.

As part of their prize, North Devon Sinfonia were awarded the opportunity of a lifetime – to perform at BBC Proms in the Park, Hyde Park, as part of the world-famous Last Night of the Proms, in front of family, friends and an audience of thousands.

Commenting on the win, Emma Kent, Conductor of the North Devon Sinfonia, said: “We’re chuffed to bits to be pronounced winners of the competition. It was such a great adventure from start to finish and the orchestra has been transformed by the experience.

“Amateur music making is so important and brings communities and individuals together.

I certainly drew on skills I gained whilst at Birmingham Conservatoire, where my sense of entrepreneurship was encouraged. I think those formative experiences of creating, rehearsing, analysing and marketing our self-styled chamber music groups helped me to learn the key skills needed to succeed.

The series was presented by BBC Radio 3 and BBC Proms presenter Katie Derham. The competing orchestras were mentored through the process by double-bassist Chi-chi Nwanoku, and judged by conductor Paul Daniel.

Other competing orchestras included West Bromwich-based The People’s Orchestra and Stirling Orchestra, which both also feature students from Birmingham Conservatoire.